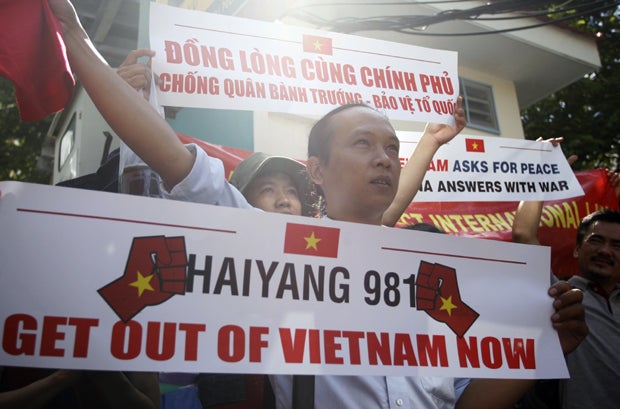 Vietnamese protesters hold banners during a protest rally against China outside the Chinese Consulate in Ho Chi Minh City, Vietnam, Saturday, May 10, 2014. Around 100 people gathered and protested China’s deployment of an oil rig in the disputed South China Sea, in the country’s commercial capital. Vietnamese anger toward China is running at its highest level in years after Beijing deployed the oil rig in the disputed water. AP

But Vietnamese authorities — who have occasionally allowed demonstrations to vent anger at the country’s giant neighbour — warned they would “resolutely” prevent any further outbursts.

China’s positioning of an oil rig in waters also claimed by Vietnam has ignited long-simmering enmity between two communist neighbours who have fought territorial skirmishes in past decades, with protests erupting in major cities in recent days and enraged mobs torching foreign-established factories.

An alliance of 20 vocal Vietnamese NGOs called for fresh protests in the capital Hanoi, the southern economic hub of Ho Chi Minh City, and other areas against China’s “aggressive actions” in the South China Sea.

However, it urged participants to remain peaceful following the chaos Tuesday and Wednesday.

“Those violent actions created a bad image for patriotic demonstrations and the people of Vietnam; therefore, they must be stopped,” said a statement issued on social media late Friday.

The alliance comprises largely anti-government organisations and is believed to have played a role in stirring the recent protests.

In a text message sent by the government to Vietnamese mobile phone users Saturday, Prime Minister Nguyen Tan Dung said authorities across the country had been ordered to “implement measures to resolutely prevent illegal demonstrations that could cause social and security disorder.”

China’s deployment of the giant rig is viewed in Hanoi as a provocative assertion of Beijing’s hotly disputed claims in the South China Sea and has been criticised by Washington as exacerbating territorial tensions.

There have been repeated skirmishes near the controversial rig in recent days between Chinese and Vietnamese vessels, including collisions and the use of water cannon.

The violent attacks on Chinese personnel at foreign-invested factories in Vietnam have further aggravated the situation, with China accusing Vietnam’s government of a role in the unrest.

Beijing, which has refused to budge on the oil rig, has said two Chinese were killed and more than 100 injured over the past week.

The report said Liu complained about the unrest and “urged the Vietnamese side to take actions to deal with the aftermath of the riots”.

The attacks on foreign enterprises — which included Chinese, Taiwanese and Korean businesses — appear to have spooked Vietnamese authorities, which depends heavily on foreign investment for economic growth.

But while condemning China’s maritime actions, the government has warned against further protests and pledged foreign investments would be protected.

The oil-rig confrontation is the latest to spark alarm among China’s Southeast Asian neighbours, who complain of increasing maritime intimidation by Beijing.

China claims nearly all of the South China Sea, which is believed to hold significant offshore energy reserves.

Read Next
40 dead as Bangladesh ferry search called off
EDITORS' PICK
Get exciting deals and discounts when you download the new McDonald’s App
SM continues to send relief assistance to remote towns in Batangas
Palace: US Senate move also made Duterte junk VFA
Year of metal Rat: ‘Rooster’ Duterte warned of scandals
China expands lockdown against virus, fast-tracks hospital
‘A greener, cleaner tomorrow’: A how-to guide for Filipinos who want to help with today’s energy crisis
MOST READ
No time for revelry; Tagaytay instead plans for alert level 5
Palace: US Senate move also made Duterte junk VFA
Dina Bonnevie on Coney Reyes: We have forgiven each other
Countries with confirmed cases of coronavirus
Don't miss out on the latest news and information.