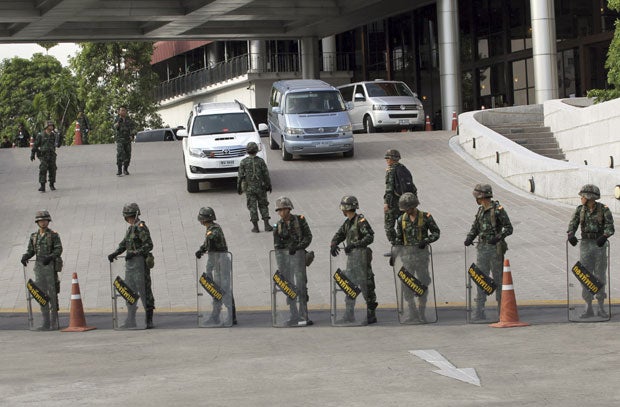 Thai soldiers block a motorcade of an attendant at the Army Club shortly after the army staged a coup Thursday, May 22, 2014, in Bangkok, Thailand. Thailand’s army chief announced a military takeover of the government Thursday, saying the coup was necessary to restore stability and order after six months of political deadlock and turmoil. AP

BANGKOK—A former political science professor was discussing the Thai army’s declaration of martial law on live TV when the talk show was suddenly interrupted to transmit order No. 9 from the Peace and Order Maintaining Command.

The military edict banned media from interviewing academics and ex-government officials whose opinions could incite conflict. Shortly afterward, the host turned to her guest.

“We have to wrap up the show for now,” she said, before smiling and asking, “Do you have anything to add?”

Sukhum Nualsakul, a former rector of Ramkhamhaeng University, waved to the camera and responded simply, “See you when the situation is better.”

That scene Tuesday in the studios of the independent Thairath TV station underscored the precarious state of press freedom in  Thailand  in the wake of General Prayuth Chan-ocha’s unexpected declaration of martial law this week and his decision Thursday to take control of the government.

Prayuth said the moves were necessary to restore stability after nearly seven months of political deadlock and deadly violence. At least 28 people have been killed since November, when a protest movement began pushing to overthrow the government.

Journalists and rights groups have criticized the army for primarily targeting the press rather than protesters.

Of the 12 edicts issued Tuesday by the newly formed Peace and Order Maintaining Command, the military committee set up to oversee the army intervention, at least five concern media censorship.

Chiranuch Premchaiporn, a leading press freedom advocate from the online news outlet Prachatai, said the army believes “that by shutting people up, they can control the situation.”

“That can’t work in a democracy,” she said. “Thailand  is deeply divided. Our problems will never be solved if people are not allowed to express their ideas and speak.”

Martial law was announced in the dead of night, at 3 a.m. Tuesday. Troops fanned out across the capital and entered TV stations, forcing them to broadcast the army’s message. Soldiers remained in master control rooms afterward to censor comments deemed “negative,” and many remain.

So far, at least 14 partisan TV networks — both pro- and anti-government stations — have shut down and nearly 3,000 unlicensed community radio stations across  Thailand  have been ordered to close. Newspapers have been warned not to publish articles that could incite unrest. The army says violators will be prosecuted, but so far, none have.

The army has extended its censorship bid into social media, setting up a special committee to monitor it and summoning Internet service providers to discuss the issue. One, True Corp., says it has blocked access to six websites with “inappropriate” content.

Regional military commanders have ordered several academics not to comment on the political situation, according to Human Rights Watch. And at least one major bookstore in Bangkok, Kinokuniya, has pulled political titles from its shelves that could be deemed controversial.

An employee there, who spoke on condition of anonymity, said the company took the action voluntarily. But Benjamin Zawacki, an independent analyst who lives in Bangkok, said on Twitter that the store informed him six books he had ordered were “prohibited for sale due to martial law.”

The books included titles such as “Legitimacy Crisis in  Thailand,” a collection of essays that examine the conflict that has roiled the Southeast Asian country since the army overthrew former Prime Minister Thaksin Shinawatra in a 2006 coup, over allegations that he abused his power and disrespected the nation’s king.

Thaksin’s ouster left  Thailand  sharply divided, between a poorer rural majority in the north and northeast that benefited from his populist policies and a traditional elite of staunch royalists and powerful businessmen in Bangkok and their supporters in the south.

Although some print media in the capital have toned down their reporting, commentaries on social media that are critical of the army intervention continue unabated.

One example: a photo circulating on Twitter of two women holding up paper signs that read, “No Martial Law — A Coup in Disguise,” and “Stop Abusing People Power!” as they stand next to helmeted soldiers decked in camouflage and black armored vests.

Leading Thai media organizations say that although some politically affiliated TV channels have broadcast provocative content that could fuel hatred, the military orders contravene the right to freedom of expression guaranteed by the constitution.

Shawn Crispin, the Bangkok-based representative of the Committee to Protect Journalists, agreed.

“Partisan media on both sides have at times breached ethical lines in broadcasting hate speech … but we think the military wrongly believes that free speech is stoking the conflict,” he said. “If  Thailand  is going to come out of this crisis, the country needs to have an open and free debate.”