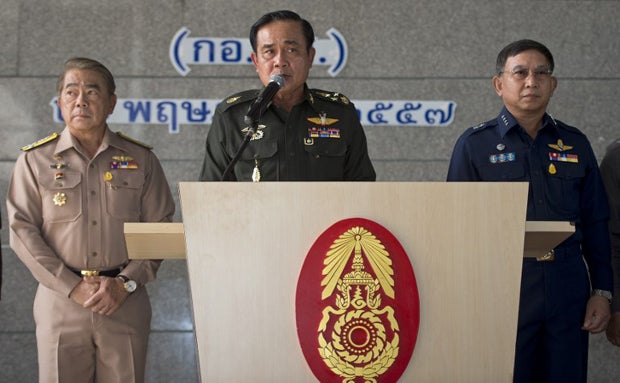 Thai Army chief General Prayut Chan-O-Cha (C) speaks next to Navy chief Narong Pipatanasai (L) and Air Chief Marshal Prajin Jantong (R) during a press conference at the Army Club in Bangkok on May 20, 2014. Thailand’s army declared martial law after months of deadly anti-government protests, deploying armed troops in central Bangkok and censoring the media but insisting the move was “not a coup”. AFP

BANGKOK—Thailand’s army chief will chair a meeting Wednesday between representatives from both sides of the country’s bitter political divide, a day after declaring martial law, a military spokeswoman said.

General Prayut Chan-O-Cha called the meeting between top officials of the ruling and opposition parties as well as the election commission, the Senate and the heads of the pro- and anti-government protest camps at the Army Club in Bangkok at 1:30 p.m. (0630 GMT), the spokeswoman told Agence France-Presse.

Prayut invoked martial law on Tuesday, saying he had to act because political tensions have spiralled following months of deadly anti-government protests — a move critics branded a “de facto coup”.

He denied it marked a military takeover and had promised he would bring together the antagonists in Thailand’s political conflict for talks on an end to the crisis.

But the dispatch of armed troops to the streets, the shutdown of more than a dozen television stations, and the sweeping powers assumed by the military have sparked international concern over restricted civil liberties in the kingdom.

DFA tells Filipinos in Thailand to prepare for evacuation if…