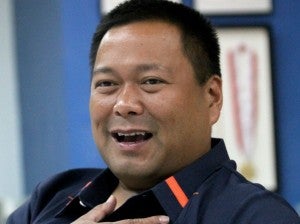 MANILA, Philippines—Senator Joseph Victor “JV” Ejercito decried what he feared were “concerted” efforts by the Aquino administration to bring down the opposition, particularly targeting either members of the Estrada or Ejercito clan.

“I hope there won’t be any concerted efforts to wipe out the opposition . . .,” he told reporters in Filipino Wednesday.

The senator questioned why members of the opposition group have been targeted and why only cases against either the Estradas or Ejercitos were being acted on.

He specifically noted the revival of disqualification cases against his father, Mayor  Joseph Estrada, and the Commission on Elections’ decision now to  disqualify Laguna Governor Emilio Ramon “ER” Ejercito for “election overspending” during the 2013 midterm elections.

Even he himself, he said, was almost dragged into the “pork barrel” scam after Janet Lim-Napoles allegedly listed his name as one of those who allegedly transacted with her.  But Napoles’ lawyers immediately apologized to the senator for her alleged mistake to include his name on the list.

Senator Ejercito’s half-brother and colleague in the Senate, Senator Jose “Jinggoy” Estrada, was also among those implicated in the “pork” scam.

“We can see, why the opposition, why do the Estradas or the Ejercitos have decisions on disqualification cases,” he said.

Asked if the administration could be behind moves to destabilize the opposition, Ejercito said yes.

Asked again if President Benigno Aquino III could be part of these moves, Ejercito said: “We can’t say. It could be his party. It could be he doesn’t know because we know that his party is angry with us no matter what we do.”

When reminded about the perceived friendship between the Estrada and Aquino families, Senator Ejercito said: “Well friends if facing each other but when backs are turned, doesn’t look it.”