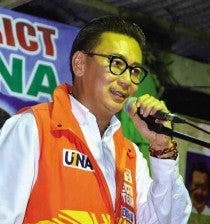 MANILA, Philippines—Commission on Elections (Comelec) Chair Sixto Brillantes Jr. on Friday dismissed claims that the election body was only going after opposition politicians who violated election rules after one of its divisions decided to unseat Laguna Gov. Jeorge “ER” Ejercito.

Brillantes pointed out that the Comelec en banc last week ordered the filing of charges against Antique Gov. Exequiel Javier, a member of the ruling Liberal Party, after he illegally suspended a mayor during the last elections.

“We are hearing [comments] that politics is supposed to be involved [in Ejercito’s case] because he was the first one to be hit and he is a member of a [prominent political clan]. I don’t understand that,” Brillantes said in an interview.

Ejercito is a nephew of former President and now Manila Mayor Joseph “Erap” Estrada and a cousin of embattled Sen. Jinggoy Estrada, who was recently charged with plunder for his alleged role in the P10-billion pork barrel scam.

“Ten days ago, we came out with a resolution charging for an election offense the incumbent governor of Antique, Exequiel Javier—and his party is the Liberal Party,” Brillantes said.

“So, we don’t bother with their party affiliations, initials, or who they are. What we are focusing on is the election law which we are supposed to implement and enforce,” he added.

Brillantes said the Comelec was reviewing all the statements of contributions and expenditures (SOCEs) that were submitted by candidates in the recent midterm elections, including those from senators.

“All of them. We are reviewing and auditing them to find out if there’s any violation. In fact, we are reviewing the SOCEs submitted not just by the winners but also by the losers,” Brillantes said.

“If you violated the law, sorry, but everyone should follow the law,” he added.

Brillantes said candidates should strictly follow election rules even if they believe that the limit of “P3 per voter” imposed by the campaign finance law was too low.