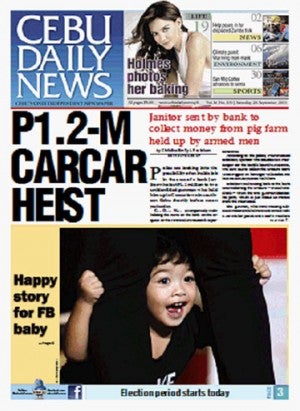 Police are looking into the possibility of an inside job in the case of a bank janitor who lost P1.2 million to two unidentified gunmen who held him up in Carcar town in southern Cebu shortly before noon yesterday.

Cebu Daily News is temporarily withholding the name of the bank on the request of the financial institution’s representatives.

According to the police, Marvin Dazo Cababan, a janitor who doubles as a messenger for the bank’s branch in Carcar, was sent out to collect the amount from Vifco Piggery in barangay Valladolid. He had no security escort with him.

Cababan was heading back to the bank after collecting the amount – in cash and check – when the two gunmen blocked his path, which is just about 20 meters from the main road.

The gunmen, who were wearing full-faced motorcycle helmets and armed with a .45 caliber pistol and a KG-9 machine pistol, grabbed his sling bag where the money was placed. They also took the key of Cababan’s motorcycle before speeding away.

Cababan pushed his red Honda XRM motorcycle to a nearby motorcycle shop where he called the bank for help.

According to SPO3 Joramac Tanod-tanod, the investigator handling the case, it has been a practice between the bank and the piggery management to send a messenger to collect their deposits.

“They don’t send a teller with security escorts to the piggery. The road leading to the piggery is also narrow that only a car or a motorcycle could pass,” he said in Cebuano.

Tanod-tanod added that the manager of the piggery was also surprised as to why the robbers knew that the bank was sending somebody to collect the amount since only the managers of the piggery and the knew about the scheduled collection.

Police yesterday started questioning the piggery’s workers to determine if any one of them were in cahoots with the suspects.

Senior Supt. Noel Gillamac, chief of the Cebu Provincial Police Office, yesterday sent a team from the Provincial Intelligence Branch to Carcar to help the local police in investigating the case.

“I want our men to finish this case as soon as possible,” he said.

Bank representatives yesterday went to Cebu Daily News and requested that the name of the bank be kept under wraps for the time being. One of the representatives claimed that they are still waiting for the police to finish their investigation so they could forward a report to their head office in Manila and to the Bangko Sentral.

The representative later in the day said the bank will be issuing a statement, but called a few hours later and reiterated their request for anonymity as they have not yet received a copy of the statement from their head office. the company until they can release their official statement next week.