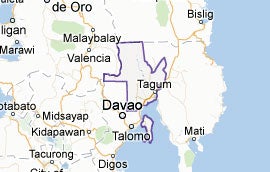 In a 71-page report, the HRW detailed the activities of the “Tagum Death Squad,” which carried out at least 298 extrajudicial killings of undesirables from 2007 to 2013, for which no one was prosecuted.

Among those murdered were children as young as nine and 12, criminals, and those who didn’t even fit the profile – such as a journalist and businessman.

Philem Kine, HRW deputy director for Asia, alleged that the Tagum Death Squad was backed by local officials, including ex-mayor Rey Uy who served from 1998 to 2013.

The human rights group had sent copies of its report, “One Shot to the Head: Death Squad Killings in Tagum City, Philippines” to Uy as well as the incumbent mayor and various government agencies, but received no reply.

“The government’s failure to act decisively against death squad killings has certainly contributed to the horrific death toll in Tagum City. President Aquino needs to send a loud and urgent message that deploying death squads as a ‘crime control’ measure is unlawful and needs to stop,” Kine said.

The report included interviews of surviving victims, their families, police officers, as well as four ex-members of the death squad, who pointed to Uy’s involvement in the vigilante group.

“Tagum City’s former mayor helped organize and finance a death squad linked to the murder of hundreds of residents,” Kine said, slamming the extrajudicial killings as a “perverse form of crime control.”

Out of the 298 killings, which provincial police attributed to the death squad, the HRW was able to profile 12 killings from 2011 to 2013.

Of this figure, two were boys aged nine and 12, both killed separately on April 12, 2011. According to the report, the boys frequented the Freedom Park behind the Tagum City Hall and were accused of theft and other petty crimes.

Also profiled were the murders of businessman Roberto Onlos, 62, in October 2011, allegedly due to disputes over a mine-rich tribal land; businesswoman Alicia Ang, 59 in August 2012; and journalist Rogelio Butalid, 46, in December 2013.

Kine noted that in one instance, the mother of one victim claimed to have been “warned” by Uy himself for the victim to get out of Tagum City.

In a video presented in a press conference Wednesday, Minta said they were sometimes ordered to get “two to three heads a week.”

According to the report, the targets were from an “order of battle” of what Uy considered as “weeds” or undesirable elements. The weapon of choice was usually a caliber .45 pistol.

“They said they wanted to clean up Tagum, to bring change to Tagum, so that bad elements would think twice in coming in because they would end up dead in Tagum,” Minta was quoted in the report as saying.

The report, quoting the ex-death squad members, alleged that the death squad worked under a cover of legitimacy as security aides of the city government’s Civil Security Unit.

The 12 profiled cases were killings all done in broad daylight, by motorcycle-riding gunman.

Minta, a former member who eventually sought police protection after getting targeted himself, alleged that the orders came from the mayor and that on two occasions, he received payment from the mayor himself.

Kine lamented that the local police did not investigate some of the cases known to have been perpetrated by the death squad since they were “the mayor’s men.”

Although a new mayor had assumed office in 2013, some “death-squad style killings” happened, Kine added.

What Went Before: The ‘Davao Death Squad ‘