Ducut got P40M as agent for lawmakers 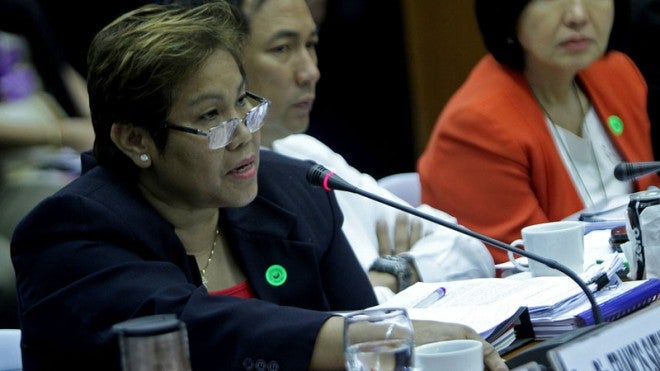 Zenaida Ducut, the Pampanga representative from 1995 to 2004 and current chair of the Energy Regulatory Commission, netted at least P40 million in commissions over the past decade as an agent for lawmakers in schemes to defraud the government of P10 billion in funds meant to ease rural poverty. PHOTO BY RICHARD A. REYES

Ninth of a series

MANILA, Philippines—She was in Congress at the outset of her third term when she first met Janet Lim-Napoles, who was then casting her eyes on the lucrative congressional pork barrel.

The friendship blossomed and, according to the digital files of Napoles’ former finance officer, Benhur Luy, she netted at least P40 million in commissions over the past decade as an agent for lawmakers in schemes to defraud the government of P10 billion in funds meant to ease rural poverty.

Zenaida Ducut, the Pampanga representative from 1995 to 2004 and current chair of the Energy Regulatory Commission (ERC), served as Napoles’ agent for Senators Lito Lapid and Miriam Defensor-Santiago and at least 17 congressmen, according to the Luy files.

Ducut has declined the Inquirer’s requests for comment on her alleged involvement in the scam.

The names of 10 past and 15 present senators and 150 current and former members of the House of Representatives are recorded on the hard disk drive (HDD) of Luy, who has turned state witness after he was allegedly illegally detained by his employer after he threatened to divulge her activities.

According to official documents made available to the Inquirer, some P6 billion in allocations for senators under the Priority Development Assistance Fund (PDAF), a pork barrel, went to kickbacks and ghost projects coursed through Napoles’ 21 nongovernment organizations (NGOs) and foundations.

Another P4 billion allegedly stolen by Napoles came from the PDAF of House members from P2002 to 2012 through various implementing agencies, with the funds landing in the bank accounts of Napoles’ fake organizations and affiliate companies.

Luy’s files also showed that the 58-year-old Ducut had the most number of clients of lawmakers who dealt with Napoles.

The records also showed that Lapid was the first senator who became a client of Napoles in 2002 through the efforts of Ducut. Later, the ERC chair enlisted Santiago as client in 2005.

Ducut has been named in a letter-complaint lodged by the National Bureau of Investigation and the Department of Justice in the Office of the Ombudsman for malversation, direct bribery, three counts of graft and violation of the code of conduct of public officials and employees in connection with the P10-billion pork barrel scam.

The records showed that Ducut received separate commissions from projects under the Department of Transportation and Communications, allocations for members of congressional Commission on Appointments and from savings of the Department of Agriculture.

In some instances, according to the records, Ducut received the kickbacks for lawmakers. Some of these kickbacks were deposited in Ducut’s savings bank account at a Metrobank branch in San Fernando, Pampanga province, under Account No. 676-3676022776.

The records further disclosed that the money transferred to Ducut’s account or coursed through her personally was taken from the various bank accounts of Napoles’ NGOs.

The records showed that Napoles financed the media blitz of Ducut when she was appointed as ERC head by then President Gloria Macapagal-Arroyo, now a Pampanga representative.

Prior to being appointed as ERC chief, Ducut, a lawyer, served as deputy chief of Arroyo’s presidential legal counsel.

A copy of the hard disk drive containing the files of Luy was given to the Inquirer when Luy’s parents, accompanied by their former lawyer Levito Baligod, visited the newspaper on April 27, 2013, to request assistance in exposing Napoles’ illegal activities.

In addition to the HDD, Luy also provided the Inquirer documents of transactions of lawmakers with Napoles and her fake organizations.