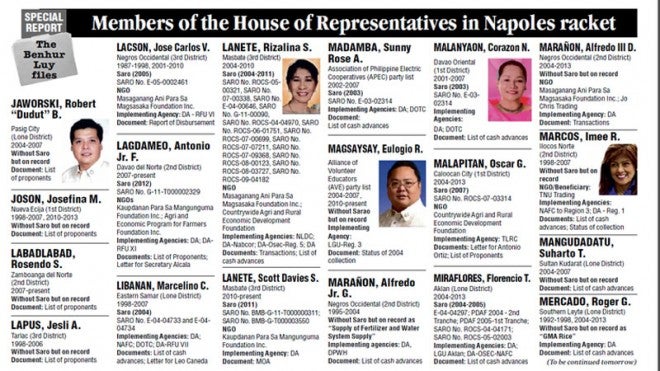 MANILA, Philippines—Former and incumbent members of the House of Representatives on Monday protested insinuations of impropriety arising from their inclusion in the purported files of Benhur Luy, the former finance officer of Janet Lim-Napoles, the alleged mastermind in the systematic theft of pork barrel funds.

Some congressmen declined to comment and others did not respond to the Inquirer’s requests for reactions. Several lawmakers on the list have died.

Former Parañaque Rep. Roilo Golez said the fact that Luy’s files clearly stated that there was no special allotment release order (Saro) associated with him belied his involvement in any misuse of public funds in connection with Napoles’ alleged plunder of the congressional Priority Development Assistance Fund (PDAF).

“The story clears me by stating there is no Saro. No Saro, no fund. I checked with my staff and they said we did not entertain any Napoles project and that should be clear from the fact, as confirmed by the reporter, that there is no Saro,” Golez said.

“Proponents can come to a congressman but if not entertained, there is no project and no issue,” he said.

Golez said all of his projects involved infrastructure such as school buildings, multipurpose halls, road concreting, river and creek desilting, and the like, save for medical assistance for the Philippine General Hospital and free burial by the Department of Social Welfare and Development (DSWD).

Aurora Rep. Bellaflor Angara-Castillo said no portion of her 2003 PDAF allocation had been released or set aside for the Department of Transportation and Communications (DOTC), and this could be checked on the website of the Department of Budget and Management. “I just wished you checked and double-checked before running the story about me. Even publishing my side would not undo the damage the report has inflicted on my record as a public servant,” she said.

Said former An Waray Rep. Florencio Noel: “That’s unfair. They should come out with the Saro number before mentioning my name… Definitely, I have no project with them. I am certain I do not have dealings with them.”

“The only letters I wrote the DOTC, which are on file, were with regard to the airport of Tacloban and the port of Babatnon. I understand that the group of Napoles does not implement those,” he said in a phone interview.

Pangasinan Rep. Leopoldo Bataoil said: “I again assure our constituents that all our PDAF projects were properly implemented with utmost transparency… Let justice take its course. The appropriate committees and agencies are already investigating the matter of this alleged pork barrel scam.

In an earlier privilege speech, Nueva Vizcaya Rep. Carlos Padilla said he had not had any dealings with Napoles and that none of his PDAF went to her dubious nongovernment organizations (NGOs). Padilla said his signature on a letter in 2003 requesting P48 million worth of various communications and IT equipment was forged. He said he was not in Congress when the transaction was completed.

La Union Rep. Victor Ortega said he did not know about the Social Development Program for Farmers Foundation, which supposedly got P10 million of his PDAF during a period spanning 2007 to 2009. “They can investigate me. I did not get any funds,” he said in an earlier interview. Ortega said the state-owned National Agribusiness Corp. took care of the livelihood project funded by his PDAF, and most likely chose the NGO that implemented it.

Laguna Rep. Benjamin Agarao Jr. said: “I am included? Perhaps it was not me… What I know was they made things difficult for me then.” A member of the opposition Liberal Party then, Agarao said he received “zero” PDAF from the Arroyo administration.

Former Rep. Anthony Dequiña of North Cotabato said: “I was surprised. I was amazed. I was puzzled. I could not believe my name was dragged into this mess, how can I transact whatever deal with Napoles when I was no longer a solon at that time?”

Rep. Rufus Rodriguez of Cagayan de Oro City said: “I absolutely deny that I had any dealings with Janet Lim-Napoles or with any of her people or with any of her organizations, NGOs and foundations. All of our PDAF projects were given directly to government agencies for implementation.”

Former Rep. Erico Fabian of Zamboanga City: “I welcome whatever investigation and will follow legal procedures so that this will give those alleged to be involved a chance to clear their names.”

Cebu Rep. Eduardo R. Gullas said: “I have absolutely no dealing ever with Napoles or any of her associates or employees. I don’t know her. Neither have I met her. My PDAF is given to the LGUs in my congressional district—the three cities and municipalities… This is a big blow to me. I protect my credibility and my family’s reputation like I protect my life.”

Cebu Rep. Antonio Cuenco said: “I deny vigorously my involvement with her. Most of my PDAF were given to DSWD. It also went to my education scholars in Cebu City… I had no dealings with DOTC.”

Cebu Rep. Ramon “Red” Durano VI said: “To the best of our knowledge, all our projects were properly documented and liquidated. We cannot implement projects without Saros and NCAs (Notice of Cash Allocations).”

Cebu Rep. Raul del Mar said: “That’s a blatant lie! I never had a single PDAF transaction with Napoles, Benhur or any of their NGOs.”

Former Abono Rep. Robert Raymund Estrella said: “We never gave any of our funds to any Napoles NGOs.”

Isabela Gov. Faustino Dy III, a former representative, said: “It is probably a demolition job… These are plain lies and aimed at maligning our integrity.”

Cabagan Mayor Rodolfo Albano Jr., a former Isabela representative: “I have nothing to do with that list or transactions with Napoles or Luy.”

Former Nueva Ecija Rep. Josefina Manuel-Joson said through her lawyer that her measly PDAF during her term was allocated for infrastructure, education and medical and social services, which were all aboveboard, fully implemented and documented.

Isabela Rep. Giorgidi Aggabao said none of his PDAF had been channeled to NGOs, since all his funds had been coursed through and implemented by the province of Isabela or its municipalities Jones and San Agustin. “I can tell you outright that is false. I never dealt with DOTC.”—With reports from Maricar Cinco, Inquirer Southern Luzon; Julie S. Alipala, Edwin O. Fernandez, Bobby Lagsa, Orlando Dinoy, Danilo Adorador, Inquirer Mindanao; Anselmo Roque, Tonette Orejas and Carmela Reyes-Estrope, Inquirer Central Luzon; Yolanda Sotelo, Gabriel Cardinoza, Villamor Visaya Jr. and Leilanie Adriano, Inquirer Northern Luzon; and Carmel Loise Matus, Inquirer Visayas