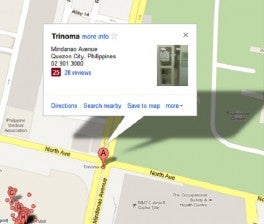 Media reports said the tissue was found by a female mall personnel at the first level of the Mindanao car park adjacent to the department store of Trinoma.

Written on the tissue was a threat reportedly warning mallgoers to vacate the building in an hour before a bomb explodes.

The bomb squad of the Quezon ‎City Police District (QCPD) conducted a search but did not find any traces of explosives in the area.

The bomb scare did not cause panic among mallgoers‎, reports said.