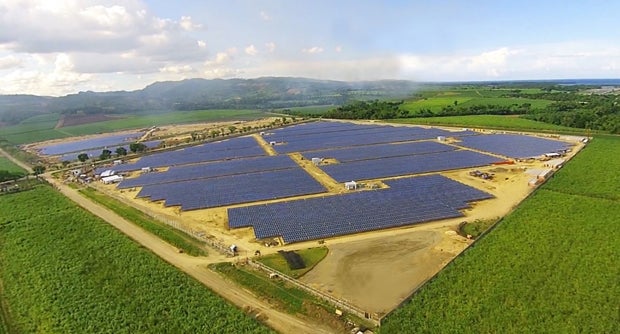 President Benigno Aquino III, guest of honor at the SaCaSol inauguration led the ribbon-cutting and switching-on ceremony, together with Secretary Carlos Jericho Petilla from the Department of Energy and Senator Loren Legarda. Representatives from Bronzeoak, Thomas Lloyd, the International Finance Corporation and local government officials were also in attendance.

In October 2013, Conergy was contracted by SaCaSol to carry out the planning, supply, engineering and construction of the 22-megawatt solar power plant, the largest solar farm in the country. The project has been built on two sites: 13 MW and 9 MW for Phase One and Phase Two, respectively.

With the first 13 MW of the SaCaSol solar plant commissioned, power is now being supplied to the grid at the pre-determined feed-in-tariff rate for solar power set by the Energy Regulatory Commission (ERC) which is currently set at P9.68/kWh. The SaCaSol plant is expected to be completed by mid-2014, with 88,300 Conergy P-series modules set to produce around 35,000 megawatt hours per year – enough energy to supply 13,000 households in the Philippines. Once completed, the facility is expected to reduce CO2 gas emissions by 18,820 tons per year.

Conergy CEO for Asia Pacific, Marc Lohoff shares, “SaCaSol is the first utility scale solar plant in Negros and the Visayas region and is the largest solar power plant in the country. With our market entry in the Philippines, we are opening up another attractive and emerging growth market in Asia, adding to our strong presence in Thailand. We are just about a month away from completing this project and together with our shareholder Kawa, we are looking forward to support more initiatives that will accelerate the development of solar energy and address the growing power demand in the country with alternative power sources that are sustainable, reliable and cost-effective.”

Alexander Lenz, President for Conergy Asia & Middle East points out, “The conditions for solar projects in the country are very positive. This includes the Philippines’ electricity rates – the country has the fifth highest electricity prices in the world today, and the second in Asia and also suffers from frequent blackouts.  But thanks to high solar radiation of ~5kWh per square meter a day, and a 6-7% annual economic growth rate, solar energy can become a genuinely competitive and self-sustaining proposition in the country, especially if executed with the appropriate scale.”

Conergy is working on the SaCaSol project in collaboration with its partner, SCHEMA Konsult Inc., a multidisciplinary technical consulting company. Project completion is expected by the first half of 2014.