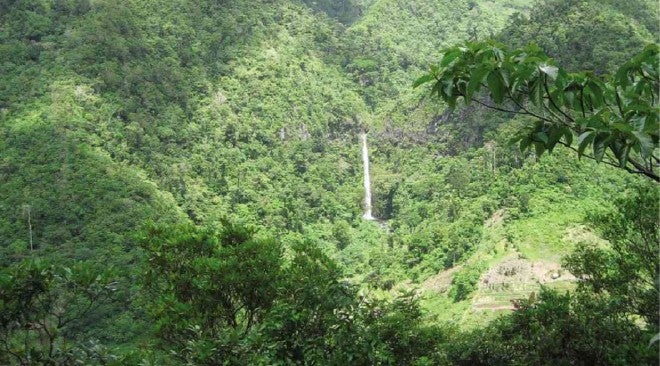 NEGROS OCCIDENTAL—For its cool climate and many natural attractions, Don Salvador Benedicto town has been dubbed the summer capital of Negros Occidental province. Two-thirds of its territory has been declared a protected area, being part of Northern Negros Natural Park (NNNP).

But municipal officials are now eager to convert about 500 hectares of the protected land into alienable and disposable. Rep. Julio Ledesma IV of Negros Occidental’s first district has also filed a bill in the House of Representatives, seeking to create a 200-ha townsite from the proposed 500-ha local government property.

Don Salvador Benedicto, 42 kilometers from Bacolod City, is at the center of the mountains of northern Negros Occidental. One of its famous landmarks is  Lantawan (viewing deck), overlooking Malatan-og Waterfalls.

The town boasts pine trees lining a 1.7-km stretch of the road from Barangay Igmayaan to Poblacion. It has a kilometer-long zipline over 1,000 feet high, said to be the longest and highest in the country.

Only one-third of Salvador Benedicto’s land area of 17,036 ha is considered alienable and disposable—a condition for property titling. The rest is part of  NNNP, which has the most extensive remaining forest on Negros Island and hosts the largest watershed of the province.

The park is home to 140 bird species and two endangered animals—the Philippine spotted deer and the Visayan warty pig.

Converting a portion of the town, especially those within the multiple-use zone, into alienable and disposable would bring economic progress to the fourth-class municipality (annual income: P25 million to P35 million) and upgrade its income status, Mayor Jose Max Ortiz said.

Ortiz has pointed out that the municipal hall and several other government buildings are found at NNNP. In the meantime, some individuals, presumably rich, have erected rest houses and other structures within the protected area.

So far, the provincial environment and natural resources officer, Andres Untal, has issued 40 cease-and-desist orders (CDOs) to people who have built or are building structures within NNNP. They included Mayor Andrew Montelibano of Murcia town,  Ortiz, businessmen and doctors.

On April 10, the Protected Area Management Board approved a resolution, creating an ad hoc committee to further study and formulate policies on the use of areas classified as multiple-use zones at NNNP in 30 days. It will also determine action on those who have been issued CDOs.

It was agreed upon  that no further construction and development  be allowed within the protected area until the committee gives its recommendations.

Ledesma’s bill has been filed three times  since 2007.

In January, Ledesma refiled his bill under the 16th Congress, according to his aide, Marton Cui, citing a request to expand the townsite coverage from 200 ha to 500 ha.

The lawmaker, however, opted to stick with the 200 ha to avoid further delay, Cui said. Expanding the townsite to 500 ha would require another survey of the Department of Environment and Natural Resources (DENR), which may take at least a year to be completed, he added.

Expanding the townsite was necessary to implement the town’s development programs and land-use plan, Ledesma said in explaining the bill.

In 1995, he said, the townsite reservation of 200 ha was approved by the DENR’s Land Management Sector for Western Visayas, but the proposal was shelved by the Senate environment committee head.

Gov. Alfredo Marañon Jr. said he would support the move to convert areas in the town proper into a townsite but would oppose the conversion of more land within the NNNP protected area.

The provincial government would continue its campaign to bar encroachment into the protected area, Marañon said.

It was founded on Feb. 9, 1983, upon the approval of Batas Pambansa Blg. 336 by then President Ferdinand Marcos.

Sixty percent of the residents speak Cebuano and the rest, Ilonggo and other languages.