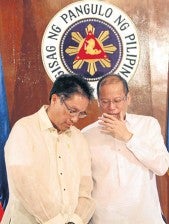 He told a news conference here that he was waiting for the findings of the Department of the Interior and Local Government (DILG), which is studying the proposal before he acts on the matter.

“The DILG is currently studying the request. We will get the inputs also from the Neda (National Economic and Development Authority) and the regional development councils,” he said.

Mr. Aquino was in San Carlos City on Thursday to inaugurate the San Carlos Solar Energy solar plant, the first commercial-scale solar farm in the country.

Negros Occidental Gov. Alfredo Maranon Jr. said the Negros Island region could be created through an executive order by the President.

Officials of both Negros Occidental and Negros Oriental have expressed support for the proposal.

The proposal to create a new region that is composed of the two provinces was first raised during the time of then Gov. Daniel Lacson Jr. in the 1980s.

But the President told reporters that it had to be determined first if the two Negros provinces have the necessary components to ensure their growth if they are put under one region.

Asked if the study made by the DILG had a deadline, the President said: “(Interior) Secretary (Mar) Roxas comes from this area and I’m sure he will expedite it to its logical conclusion.”

He said he was waiting for data from different government agencies on how much would it cost to create new regional offices for Negros Island.