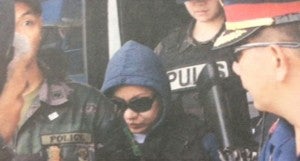 The police official, who agreed to talk on condition of anonymity, said OsMak officials apparently wanted to escape blame for Napoles’ continued stay at the public hospital.

The source said the discharge order was dated May 6, but doctors at the hospital presented the document to the police team securing Napoles only on May 12.

“OsMak officials were trying to set us up and make it appear that we are not doing our job to immediately transport Napoles back to her detention facility,” the source said.

Napoles has been confined at the hospital since March 31 after undergoing surgery to remove her uterus and ovaries.

Before her hospitalization, she was detained in a bungalow in a police training camp at Fort Sto. Domingo in Sta. Rosa City, Laguna province, in connection with serious illegal detention charges filed against her by Benhur Luy, her former employee who is now the principal witness against her in the P10-billion pork barrel scam.

“The discharge order should have been presented to us on May 6. We could have acted on it promptly and brought back Napoles to her detention facility because we have a legal basis to do so,” the police official added.