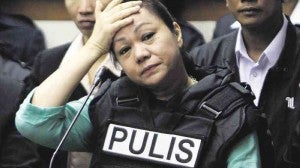 “Yes, she has manifested her intention to apply for immunity,” De Lima told reporters.

But De Lima said Napoles’ request is only secondary because the priority of the Justice Department is the verification of the names mentioned by Napoles.

“After the vetting process, we will determine if she is qualified or not. If she is telling the truth and if she can support what she has said with an independent evidence,” De Lima said.

De Lima said the DOJ’s role is  recommendatory only since it is the Ombudsman who is authorized by law to grant immunity.

Once given immunity by the Ombudsman, Napoles will no longer be charged with any complaint related to the pork barrel controversy.