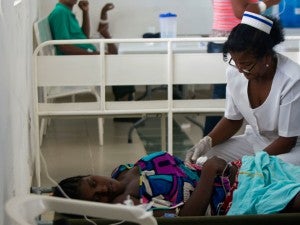 A woman with cholera receives medical attention at the Juan Pablo Pina Hospital in the town of San Cristobal, on August 27, 2013. AFP FILE PHOTO

ALAMADA, Philippines – At least 12 people have died and more than 200 others have been stricken in a suspected outbreak of cholera in four villages in the municipality of Alamada.

Alamada Vice Mayor Samuel Alim that the death toll had reached 12 by 4 p.m. Tuesday and that at least 214 other people had been stricken in the villages of Upper Dado, Tigcawaran, Mampurok and Lower Dado and taken to various hospitals.

Dr. Edifer Demetillo of the Alamada district hospital said health authorities were still trying to determine if the ailment that has stricken the four villages was really cholera.

“We do not know the main cause as of yet,” Demetillo said.

Alim said residents suspected the mystery affliction was caused by pesticide sprayed on rice fields which may have contaminated the local water supply following a heavy downpour Saturday.

Demetillo said at least 117 patients were brought to the Alamada community hospital and others were taken to hospitals in the neighboring town of Midsayap.

“Many of them are weak and severely dehydrated,” Demetillo said.

“Saturday night and Sunday night, the town ambulance had been transporting patients from far-flung villages to the community hospital,” Robles said.

The North Cotabato provincial health office has sent a team to deal with the emergency.