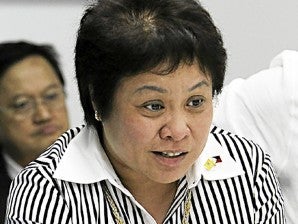 They started with highly paid doctors and lawyers but even taxi drivers and small business owners will not be spared. And the consumption patterns of upward striving politicians make particularly delicious targets.

Revenue commissioner Kim Henares on Friday said the Bureau of Internal Revenue (BIR) will carry on with its campaign to run after tax-dodging professionals as the program seems to be bearing fruit.

She said the bureau’s tax collection rate has improved, which could be the effect of the BIR’s intensified campaign to root out delinquent taxpayers.

“We are collecting much more, so maybe more people are paying right,” she told a press briefing at the Philippine Information Agency Friday.

However, Henares said it was not enough.

“We still have to reach a tipping point, but hopefully that tipping point won’t come to the [point of the] President escorting someone to jail,” she said.

For the first six months of 2011, the BIR reported that it had collected P531.8 billion in taxes from individuals and corporate taxpayers.

While it was 0.58 percent below the P534.9-billion collection target set for the first seven months, the figure was still higher by nearly 14 percent than the amount collected in the same period last year.

Citing a Philippine Institute of Development Studies (PIDS) report, Henares said there was still the tax gap—the difference between potential tax revenue and actual tax revenue—that the bureau needed to address in its tax-collection efforts.

The PIDS estimated the tax gap as amounting to more than 4 percent of gross domestic product from 2007 to 2009.

The BIR has decided to make an example of the high-earning but notoriously undertaxed legal and medical professions, filing tax evasion charges against some of their more prominent members.

According to Henares, Garcia claimed to have earned only P1.4 million in 2010 but was able to buy a condominium unit in Makati for P53.3 million, thus underdeclaring his income by 30 percent.

However, the BIR tax investigations will not be confined only to doctors and lawyers, Henares said.

She said the bureau would be filing cases against professionals in other fields found to have falsely declared their earnings to evade paying taxes.

According to Henares, the agency regularly monitors newspapers and magazines, looking out for politicians exhibiting lavish lifestyles.

She appealed to the public to help the agency by declaring the true value of their assets and liabilities and to pay the right taxes.

“It is difficult for the BIR to monitor everyone. We have to monitor 27.5 million people,” Henares said.

She said highly paid professionals and politicians should pay the correct taxes if they want to avoid being dragged into the media spotlight.

She said small businesses and cab drivers should follow the BIR rules on the issuing of receipts. Vendors selling goods in bazaars and online should register with the government and issue a receipt for every transaction.

“Everyone who has a business has to register. Those who sell goods P25 and above should give receipts,” she said.