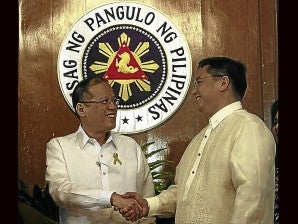 MARCHING ORDER. President Aquino congratulates former Rep. Ruffy Biazon after swearing him in as the new commissioner of the Bureau of Customs. EDWIN BACASMAS

He may look amiable but don’t let that deceive you. He’s prepared to swing the ax even at those who claim to be his friends.

Seen as soft, new Customs Commissioner Rozzano Ruffino Biazon—or Ruffy—says the nice guy image is just a front and that he can afford to lose friends if they would ask him for favors that would mean flirting with the law.

The former lawmaker from Muntinlupa City on Friday talked tough as he officially assumed the task of going  after smugglers and stamping out corruption at the Bureau of Customs (BOC).

“As they said, I look soft but make no mistake about it, I am a firm decision-maker. Looking like a nice guy is just my front,” Biazon told reporters after taking his oath before President Benigno Aquino III.

Biazon said those intending to approach him for illegal concessions had better forego their plans. He also pledged  to be more aggressive against those who would use his loved ones to get to him for accommodations.

“If you think that the favor you’re asking would result in something illegal, we should no longer talk. Second, no one should use the name of our family, otherwise you’d be the first one I’d look a reason for to put in jail,” he said.

“That goes for everyone. Anyone who wants to use the name of any of my relatives, my friends, to approach me, huwag na lang (lay off),” he added.

Biazon said it would be better to come clean when approaching him and he’d see if the request could be granted in accordance with the rules.

“Just don’t ask me to do anything illegal,” he said.

Apparently, former Commissioner Angelito Alvarez has warned Biazon against the possible infiltration of his inner circle by the henchmen of smugglers.

Alvarez lost the President’s confidence after failing to deliver on certain assignments, Mr. Aquino himself has said. Alvarez has been reported to have said the President was given the wrong information about the bureau during his watch.

Told of the advice by former colleagues in the House of Representatives that he must be prepared to lose friends while doing his job as customs commissioner, Biazon said: “I think that if you’d lose friends as a result of doing your job well, it would be those who are bad.”

“(Those) who are your good friends would stay by your side. So probably that would be the…test for my friends, if they are indeed my friends. Because if they are my friends, they won’t put me in harm’s way,” Biazon said.

A graduate of medical technology from the University of Santo Tomas, Biazon also had to deal with impressions that he was not equipped for the job.

“I take it with a smile. You know when I was new in Congress, they told me how can I be a congressman when I was not a lawyer. But a few months, a few years down the line, the question became, ’Aren’t you a lawyer?’” Biazon said.

“(My) experience in Congress, I think, has prepared me enough. Having dealt with different agencies, different officials, we can easily learn. That’s why I’m confident that we can do the job,” he added.

Biazon said Mr. Aquino had told him there would be no “sacred cows.”

“Giving protection to someone wasn’t among the directives. So, if someone would approach me, they have to talk to the President.”

Biazon said he would start his job by reviewing the systems in the bureau and the performance of the officials and employees.

Reward for the deserving

“We will talk to the bureaucracy and we will make them feel what our administration’s direction will be,” he said.

He said the systems review would plug the loopholes being used to violate the law while the performance review would identify who would have to go and who would be promoted.

“We’re not just going to swing the ax. On the contrary, if there are those whose performance is meritorious, we will give them a reward,” Biazon said.

For this, he may have to rely heavily on former Scout Ranger General Danilo Lim, his deputy commissioner for intelligence.

“Being competent in the field of intelligence is important. So I will work closely with him. And I will be expecting a lot from him,” Biazon said.

He said he didn’t follow up on their conversation.

“That is why when he first called sometime in August and he offered this position, I was surprised because the post he offered was different,” he said.

Biazon said he accepted the job to help the President, who had run on an anticorruption platform, “achieve his vision.”

“The first thing that my father (former Senator and now Muntinlupa Representative Rodolfo Biazon) told me was that this is a make-or-break thing. ‘Your name could easily be destroyed even with small things related to customs,’” Biazon said.