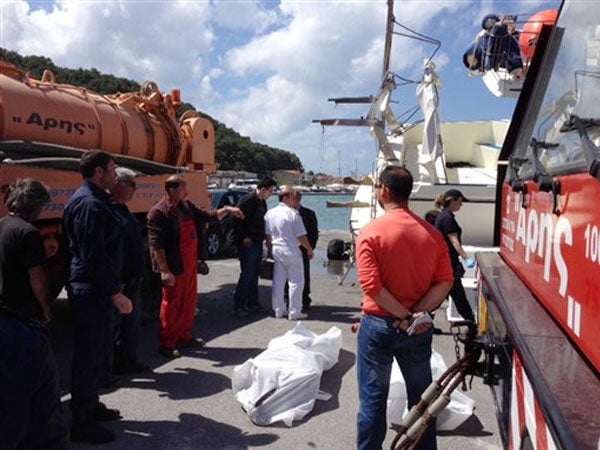 Two victims of a migrant boat sinking, in body bags, are seen at the port of Vathy on the Greek island of Samos, on Monday, May 5, 2014. At least 22 people drowned in the incident in the eastern Aegean Sea, while 36 were rescued and others remain missing. Coast guard officials recovered the bodies of two women, a man and a boy from the sea, and later found a further 18 bodies, including three children, inside the yacht after it was towed to Samos. AP

TRIPOLI, Libya — Libyan officials said Sunday the bodies of at least 24 migrants attempting to make it to Europe were found after a boat carrying 130 capsized this weekend off the country’s shores.

However, Interior Ministry spokesman Rami Kaal said another 40 bodies were washed ashore since the capsizing at al-Qarbouli, 50 kilometers (30 miles) east of the capital. The discrepancy could not be immediately reconciled.

Libya has become a prime springboard for tens of thousands of migrants trying to reach Europe in rickety, crowded boats.

Libya’s interior minister threatened Saturday that his country would help migrants reach Europe if the European Union does not do more to help his country deal with a flood of migrants using Libya as a transit point.

Addressing a news conference late Saturday, the minister blamed the presence of illegal migrants in his country for a rise in crime, the spread of illegal drugs and diseases. He did not elaborate. He also appealed to Libya’s southern neighbors to help it stop the flood of migrants.

Chaos has prevailed in Libya since the 2011 overthrow of dictator Moammar Gadhafi. With the police and the military in disarray, human smuggling has become an organized industry in which Libya’s militias have gotten involved, activists and police say.

Cities along Libya’s 1,600-kilometer (1,000-mile), largely unpatrolled Mediterranean coastline have become collection points where Africans mass, scrounging up the cash for a boat to take them the roughly 300 kilometers (200 miles) to Malta or Lampedusa.

The world, said Maziq, “must actually take a serious stand with actions and not just words.”

In response to Maziq’s comments, the Libyan government issued a statement Sunday saying it will continue to combat illegal migration to Europe and cooperation with European countries, particularly Italy, in monitoring borders to curb the migration.