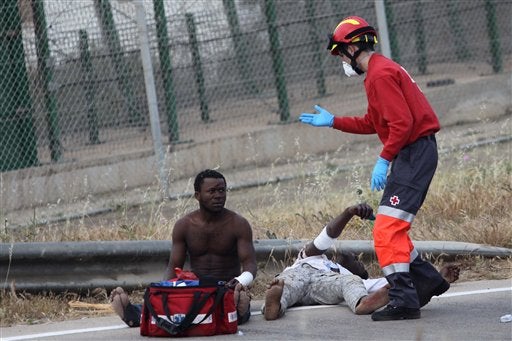 Sub-Saharan migrants sit on the Spanish soil as a Red Cross worker is on-hand to offer humanitarian assistance, next to a metallic fence that divides Morocco and the Spanish enclave of Melilla, Thursday, May 1, 2014. AP

Spain said 140 of the migrants managed to enter Spanish territory despite the efforts of the border police.

It was the latest surge in the tide of African immigrants trying to cross the Mediterranean into Europe. Spain’s two North African enclaves of Melilla and Ceuta are particularly vulnerable and have had repeated attacks by hundreds of immigrants this spring.

The migrants on Thursday rushed the fences in two waves, with 500 arriving in the early hours and another 200 four hours later.

By afternoon, more than 150 people remained perched on an outside border fence, fending off police by setting fire to clothing and throwing it at them, Spain said. Some even swung batons wrenched away from officers.

Police used pepper spray to try and force migrants down from the 20-foot (6-meter) high fence, but some climbed onto the lamp posts used to illuminate the border.

The Interior Ministry statement said some migrants were treated by Red Cross staff and five were taken to the hospital. It later said 12 police were injured.

The new arrivals to Spain made their way, some hobbling, to the region’s temporary immigrant center, which now contains more than 1,900 immigrants, the statement said, adding this meant the facility was “above its maximum capacity.”

Spain and Morocco stepped up border vigilance in February when 15 migrants drowned trying to enter Ceuta.