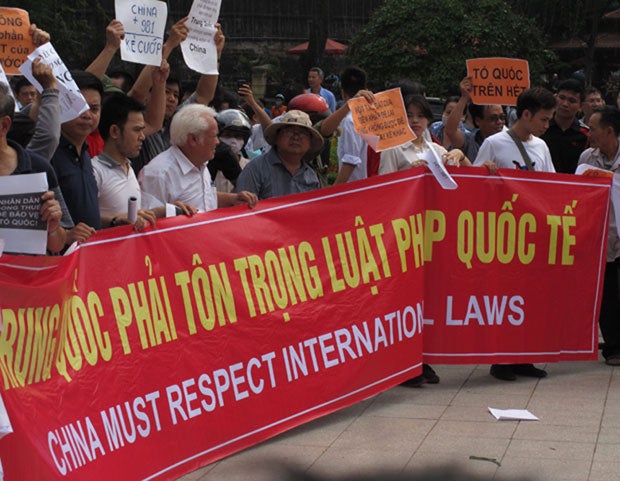 Vietnamese protesters stage a rally against Beijing’s deployment of an oil rig in the contested waters of the South China Sea, outside the Chinese Embassy on Sunday, May 11, 2014 in Hanoi, Vietnam. The deployment of the rig has a triggered a tense standoff in the ocean and raised fears of confrontation between the neighboring countries. AP

Some 1,000 people, from war veterans to students, waved banners saying “China don’t steal our oil” and “Silence is cowardly” — a dig at Hanoi’s handling of the dispute — and sang patriotic songs in a park opposite the Chinese Embassy.

“This is the largest anti-Chinese demonstration I have ever seen in Hanoi,” said war veteran Dang Quang Thang, 74.

“Our patience has limits. We are here to express the will of the Vietnamese people to defend our territory at all costs. We are ready to die to protect our nation,” he told Agence France-Presse (AFP).

Hundreds of plain clothed and uniformed police set up barricades to prevent protesters approaching the Chinese Embassy compound but made no move to break up the rowdy demonstration, even though the communist regime normally tightly controls any public expression of discontent.

Dozens of anti-China demonstrations have been held in Vietnam since 2007 to protest Beijing’s perceived aggression over territory.

The two countries are locked in long-standing territorial disputes over the Paracel and Spratly islands, which both claim, and often trade diplomatic barbs over oil exploration and fishing rights in the contested waters.

Tensions between the communist neighbours have risen sharply since China unilaterally announced in early May it would move a deep-water drilling rig into disputed waters — a move the United States has described as “provocative”.

Vietnam said China’s decision was “illegal”, demanded the rig be withdrawn, and dispatched vessels to the area — which it claims were subsequently attacked and rammed by Chinese ships.

Vietnam has alternated between tolerating anti-China rallies and violently breaking them up. The communist regime is wary of public gatherings that could threaten its authoritarian rule.

However, on Sunday it appeared there was a pro-government faction within the demonstration, including young protesters clad in t-shirts bearing Vietnam’s revered founding president Ho Chi Minh’s face, waving the communist hammer and sickle flag while shouting “Down with China!”

Other dissident-aligned factions at the protest were more critical of the Vietnamese government’s handling of the dispute and used the opportunity to call for changes to the one-party state.

“We want to send a message to the Vietnamese government also — they are responsible for this situation,” demonstrator Tran Xuan Bach told AFP.

Vietnam’s tightly-controlled state media have covered the oil rig dispute closely and reported on the demonstrations. There was no official comment from the government.