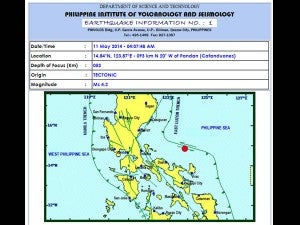 DAET, Camarines Norte – A magnitude 4.2 earthquake has hit the northern shores of Camarines Norte and Catanduanes provinces early morning on Sunday, the Philippine Institute of Volcanology and Seismology (Phivolcs) reported.

The tremor’s epicenter was at 93 kilometers northwest of Pandan town, Catanduanes and was tectonic in origin, the Phivolc’s Seismological Observation and Earthquake Prediction Division said on its official online quake recording site.

The quake was too far from the mainland to affect residents and property and no aftershocks were expected, the Phivolcs bulletin said.

Meanwhile, Phivolcs, in an 8 a.m. bulletin on Sunday, said it has recorded three volcanic earthquakes on Mt. Mayon during the past 24-hour observation period. Moderate emission of white steam plumes that drifted west-northwest and west-southwest was also noted over the same period but no crater glow was observed on Saturday night.

The volcano’s sulfur dioxide flux was measured at an average of 487 tons/day on May 6 while its geodetic results from ground deformation survey showed that its edifice, which showed swelling in November last year, has deflated and has returned to its 2010 level.

Mayon Volcano’s alert status remains at Alert Level 1, which means that it is still at abnormal condition but no magmatic eruption is imminent, the bulletin said.

However, the public was strongly advised anew to refrain from entering the 6-km radius Permanent Danger Zone (PDZ) due to the perennial life-threatening dangers of rockfalls, landslides or avalanches at the middle to upper slope, and sudden ash puffs and steam-driven or phreatic eruptions from the summit, Phivolcs said.