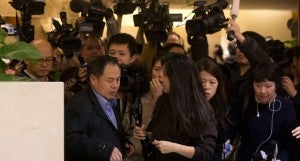 A relative of Chinese passengers aboard the missing Malaysia Airlines, MH370, left, is surrounded by journalists as he leaves after learning about the latest debris field found in a remote part of the Indian Ocean near Australia at a hotel in Beijing, China, Thursday, March 20, 2014. AP FILE PHOTO

More than two months since MH370 disappeared, no wreckage has been found to even confirm a crash, let alone apportion blame.

But relatives of the 239 people on board can still come after Malaysia Airlines because under international aviation law it is an airline’s responsibility to prove it was not to blame for an accident.

The “burden of proof” rests on the national carrier to clear its name, he added.

Under International Civil Aviation Organization rules, next-of-kin in an air crash are entitled to an automatic minimum of about $175,000 per passenger, regardless of fault, payable by an airline’s insurance company.

But Malaysia Airlines is also vulnerable to civil lawsuits for potentially greater damages by hundreds of relatives already infuriated over the lack of information on the case.

The Beijing-bound plane disappeared March 8 and is believed to have crashed in the Indian Ocean. Theories on what happened include a terror act, rogue pilot action, or mechanical problems.

No significant legal moves have yet been made as families closely monitor an immensely difficult search in vast ocean depths that has so far found nothing.

“When there is no cause identified, it is hard to see how the airline has or has not shown the absence of fault,” said Alan Tan, a professor of aviation law at the National University of Singapore.

The size of any damages would depend on where lawsuits are filed.

Next-of-kin can file in the country where an airline is based, where tickets were purchased, where the passengers were headed or where they lived.

Since most passengers were from China or Malaysia, most cases could be filed in the two countries, where courts are more conservative in awarding damages than in countries like the United States.

Damages are typically based on the lost lifetime earnings of a victim and thus could total in the hundreds of millions for all passengers combined.

“In the US, settlements usually are in the $1 million-$3 million range. For Malaysians or Chinese, salaries are lower, and hence, recoveries will be lower,” said Paul Stephen Dempsey, director of the Institute of Air and Space Law at Canada’s McGill University.

A US law firm is already planning a “multi-million-dollar” lawsuit against Malaysia Airlines and aircraft maker Boeing, on behalf of an Indonesian passenger’s family.

But legal experts said few cases will likely end up in court. They expect undisclosed out-of-court settlements between families and Malaysia Airlines and its lead insurer, German giant Allianz.

This would allow the loss-making carrier — which was struggling amid intense competition even before MH370 disappeared — to quietly lay the matter to rest and focus on rebuilding its image.

“Because of its unprecedented nature, the courts are going to look at (MH370) very carefully. That is something the airline will try to avoid unless settlement expectations from the victims’ families are perceived by Malaysia Airlines as unreasonable,” said Malaysian attorney Joseph.

Adds Tan: “This avoids court uncertainties and protracted litigation, and most claims will end up being negotiated and settled this way, particularly those outside the US.”

In the case of Air France flight 447, which crashed in the Atlantic with 228 people aboard in June 2009, the airline’s insurers made compensation payments to relatives.

Only a small number of lawsuits were filed, with a Brazilian court awarding one family an equivalent of more than half a million US dollars, before its flight data recorders were recovered in 2011.

A combination of mechanical failure and pilot error were eventually blamed.

Allianz would bear the brunt of any payouts for MH370, sparing the already financially struggling airline.

Malaysia Airlines told AFP its insurance coverage is adequate for all eventualities, declining to give details. But experts said the carrier will likely face higher future premiums.

Courts are considered unlikely to apportion any blame to Boeing, engine manufacturer Rolls Royce, or other parties without evidence implicating them.

Alleging incompetence and secrecy by Malaysia’s government and the airline, about 300 next-of-kin already have banded together to press for answers.

Malaysia Airlines has begun making some payouts to families under an “advance compensation process” but has declined to reveal details.

Lawsuits must be filed within two years of an accident. Families are holding off for now as they await news on the search, seeking confirmation of a crash, and emotional closure.

“If today someone cut off your limb, can you buy your limb back?” Yik-Kiong Hue, an MH370 next-of-kin, said in an email to Agence France-Presse.

Read Next
‘Thank mom for teaching us waste management’
EDITORS' PICK
Geek out at TOYCON 2022 powered by Smart Signature
UK’s Boris Johnson will resign, BBC reports
High inflation: Your P1 is now worth only 87 centavos
High-risk pregnancy: Reducing your risk is in your hands
Unemployment rate up to 6% in May
House energy committee chair Arroyo bats for cheap electricity
MOST READ
Suspect in grisly killing of missing woman in Bulacan arrested
Kim Atienza’s daughter flaunts bikini body in response to critics of her ‘revealing photos’
Cop slain in Isabela ambush
FDA probes popular Filipino noodle brand for ‘high level of ethylene oxide’
Don't miss out on the latest news and information.