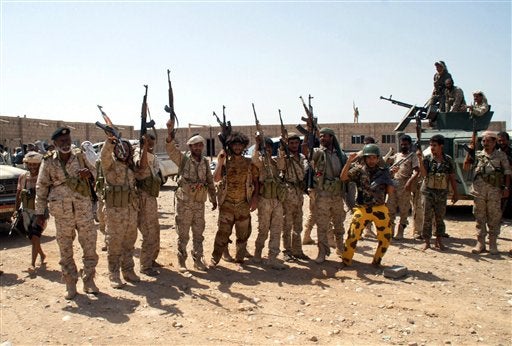 In this photo provided by Yemen’s Defense Ministry, Yemen’s army soldiers hold up their weapons at an area seized from al-Qaida in the southeastern province of Shabwa, Yemen, Thursday, May 8, 2014. Yemeni armed forces on Thursday swept al-Qaida fighters out of a district in the country’s south, one of the main goals of the major offensive waged by the military the past two weeks, the Defense Ministry said, amid fears of retaliatory attacks which officials say prompted the closure of the U.S. Embassy in the capital as a precaution. (AP Photo/Yemen’s Defense Ministry)

WASHINGTON — The State Department says two officers at the U.S. Embassy in Yemen shot and killed a pair of armed Yemeni civilians during an attempted abduction of the Americans last month.

A State Department spokeswoman said in a statement Friday that both officers have left Yemen. The government is providing no other details.

Citing unidentified U.S. officials, The New York Times reports that the Americans were a CIA officer and a lieutenant colonel with the elite Joint Special Operations Command. They were visiting a barber shop in an upscale district in Yemen’s capital.

Earlier this week, the U.S. Embassy in Sanaa closed temporarily because of attacks on Westerners.

The U.S. has waged a heavy campaign of drone strikes in Yemen against the group al-Qaida in the Arabian Peninsula.