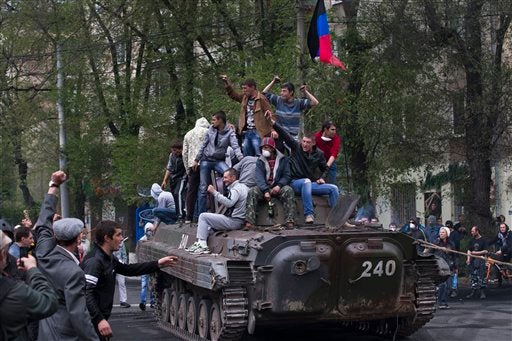 People greet pro-Russian activists atop of a government forces armored personal carrier captured from the enemy in fighting in Mariupol, eastern Ukraine, Friday, May 9, 2014. Fighting exploded Friday in Mariupol, a city of 500,000 on the Sea of Azov that is on the main road between Russia proper and Crimea. The fighting between government forces and insurgents in Mariupol has left several people dead. AP

The violence in this strategic port city on the Azov Sea — along the main road between the Russian border and the Crimean Peninsula — was a clear sign of increasing unrest in eastern Ukraine.

The Donetsk region, which includes Mariupol, and the neighboring Luhansk region are to hold a hastily organized referendum Sunday on declaring sovereignty, a move likely to deepen the crisis between supporters of Ukraine’s fledgling government and pro-Russia insurgents who claim the authorities in Kiev are a fascist junta.

There were varying accounts of Friday’s violence in Mariupol, a city of a half-million people that also was hit by unrest last month.

Ukrainian Interior Minister Arsen Avakov said about 60 gunmen attacked the police station and were repulsed in an operation that killed one policeman and about 20 people that he called “terrorists.”

The Donetsk regional government said that as of 8 p.m., seven people were killed and 39 others were wounded in the violence that came on the day that commemorates the 69th anniversary of the defeat of Nazi Germany.

The conflicting death tolls could not be reconciled. An Associated Press reporter saw three bodies on the street — one of them covered by a blanket with a policeman’s hat placed at the head.

As the police station burned, residents gave accounts of the day’s events that contradicted the official line. Some said government troops fired on unarmed protesters and attacked police who were protecting demonstrators occupying the nearby administration headquarters.

Amateur video on the Internet showed soldiers firing warning shots and later wounding men who angrily confronted them. At least one man in civilian clothes could be seen shooting in the direction of the soldiers, who backed away on foot.

“They began to shoot, and with my own eyes I saw how one man was wounded in his leg and another in his arm,” she said.

Government troops appeared to have lost an armored personnel carrier to attacking mobs. In the evening, several youths — apparently drunk — were seen in the city center climbing onto the vehicle and trying but failing to start its engine.

By nightfall, all government forces had abandoned the city center, which was blocked off with barricades of tires.

“We continue to call for groups who have jeopardized public order by taking up arms and seizing public buildings in violation of Ukrainian law to disarm and leave the buildings they have seized,” she said.

Last month, Mariupol’s city hall had been occupied for more than a week by pro-Russian protesters who were armed and masked. On April 16-17, three people were killed and 12 injured after about 300 protesters armed with stun grenades and firebombs tried to seize a National Guard base.

Obama calls for irregular forces to lay down arms in Ukraine …