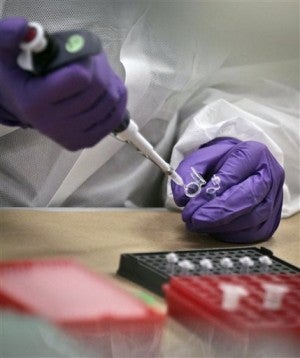 In this April 15, 2014 photo, a criminalist trainee prepare sample bone fragments for DNA testing at the training lab in the Office of Chief Medical Examiner in New York. With new technology yielding results impossible a dozen years ago, forensic scientists are still trying to match the bone with DNA from those who died on Sept. 11, 2001, and have never been identified. AP

NEW YORK— Thousands of vacuum-sealed plastic pouches filled with bits of bone rest in a Manhattan laboratory. These are the last unidentified fragments of the people who died in the World Trade Center on Sept. 11, 2001.

On Saturday, the 7,930 pouches are to be moved in a solemn procession from the city medical examiner’s office to the new trade center site. They will be kept in a bedrock repository 70 feet (21 meters) underground in the new Sept. 11 Memorial Museum that opens May 21.

The remains will be accessible only to families of the dead and to the forensic scientists who are still trying to match the bone slivers to DNA from the more than 1,000 victims who never came home and have never been identified.

“Our commitment to return the remains to the families is as great today as it was in 2001,” says Mark Desire, who oversees the four-member World Trade Center team in the city’s Office of the Chief Medical Examiner.

The death toll stemming from the attacks at the World Trade Center stands at 2,753. Of those, 1,115 victims, or 41 percent, have not been identified through a DNA match to items provided by families — toothbrushes, combs, clothing or swabs from relatives.

With ever-advancing technology yielding results that were impossible a dozen years ago, the unique genetic code gleaned from the bits of bone is the only hope for families waiting for anything tangible to officially confirm what they already know: Their loved one is dead.

In some cases, scientists have gone back to the same bone fragment 10 or 15 times, using new technology to attempt to extract DNA diminished by fire, sunlight, bacteria and even the jet fuel that poured through the towers.

The painstaking process involves pulverizing the bone fragments, adding a special chemical to the powder and then spinning it all in a centrifuge to break open the bone cells so DNA can be extracted. Then comes the last, critical step — looking to match it to an item with the victim’s DNA provided by families — part of the medical examiner’s collection of 17,000 contributions.

Four new identifications were made this past year.

Family members have long endorsed the ongoing identification process, even as some protested this weekend’s move of the remains to the museum site, which they fear could be prone to flooding.

“Don’t put them in the basement,” Rosemary Cain, who lost her firefighter son at the trade center, said at a protest Thursday. “Give them respect so 3,000 souls can rest in peace.”

Other victims’ families support the move, saying the repository is a fitting site for the remains.

“It will show the world the way we treat our dead,” Lee Ielpi, who lost his son in the attacks, said earlier in the week. “Let’s get them back to the site.”

By December, the latest technology will have been applied to every remnant in the medical examiner’s possession, exhausting the available methods. Desire said that as new technology becomes available, the efforts to identify the fragments will continue indefinitely.

The question is: How long and at what cost will the forensic team keep working to identify these last 9/11 remains? The team’s annual salary budget is $230,000, plus costs for follow-up work by other scientists and staff.

Charles Strozier, founding director of the Center on Terrorism at the John Jay College of Criminal Justice, said that work must continue “because our relationship to the Sept. 11 disaster hinges on being able to identify and pay respects to those who died.”

“The World Trade Center attack was more cruel than death usually is, because some people were simply incinerated and those remains went into the air,” Strozier said.

He was under the still-standing towers minutes after the two hijacked planes hit them, having rushed down with the then-chief medical examiner, Dr. Charles Hirsch. As the towers toppled, the men were struck and bloodied by falling glass and debris.

“It’s a service and an honor, working on something that has transformed American history,” he said.