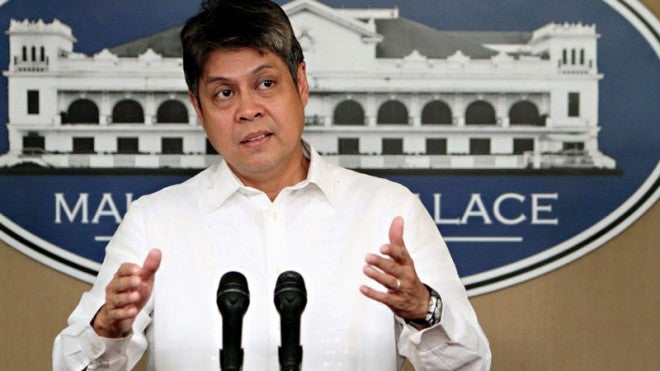 Newly appointed Presidential Adviser on Food Security and Agricultural Modernization Francis “Kiko” Pangilinan gestures during a press briefing after his appointment by the President in Malacanan on Tuesday, May 6, 2014. The former senator is tasked by President Aquino to do some serious “house cleaning” in the Department of Agriculture, which has been wracked by charges of corruption and cronyism under Secretary Proceso Alcala. INQUIRER PHOTO/GRIG C. MONTEGRANDE

MANILA, Philippines—President Aquino has tapped former Sen. Francis Pangilinan to do some serious “house cleaning” in the Department of Agriculture (DA), which has been wracked by charges of corruption and cronyism under Secretary Proceso Alcala.

“The President said I am here to help clean up these agencies. Part of this is addressing corruption and smuggling,” Pangilinan said in a Palace briefing after being sworn to office by the President as his assistant on food security and agricultural modernization.

The agriculture secretary has been under heavy fire for allowing the pork barrel scam to flourish under the Aquino administration as alleged mastermind Janet Lim-Napoles continued to channel state funds to her fake foundations with the help of her contact, Assistant Agriculture Secretary Ophelia Agawin, from way back in the Arroyo administration.

Alcala has likewise been blamed for the President’s failure to meet his campaign promise of reaching full rice sufficiency and improved food security under his term, the rise in rice smuggling, and the unabated corruption in irrigation projects.

While describing his assignment as a “food security secretary,” Pangilinan said purging corruption in the DA was part of his job description.

“The funds are already there for our farmers, and these just go to waste,” he said. “The marching orders are clear: to clean it up. So we will do what we can, as best we can to help in that respect.”

In a statement, Alcala expressed confidence that Pangilinan “will be effective” in his new post and that the “the DA family looks forward to discussing with him his specific assignments from the President himself.”

“We hope to start working with him to fulfill these tasks at the soonest possible time,” Alcala said, adding: “I’ve worked with the senator since he was head of the agriculture committee. I think he needs a free hand to do his job and I am all for it, including taking in the people he wants to work with.”

Alcala has also been criticized for appointing his cronies from his home province of Quezon (the group is collectively known as the “Quezon Mafia”) to juicy posts in the DA, including agencies transferred to the Office of the President.

“I wouldn’t say he (Alcala) failed to clean up. He needs support and that’s why we are here,” Pangilinan said. He continued to defer to Alcala as “still the primary person” in the department.

Pangilinan and Alcala have already exchanged notes, together with the President, on what should be the DA’s priorities in the next two years. A revamp of the agencies under him was not listed among the urgent goals, the former senator said.

Pangilinan was among the first members of the Liberal Party, the President’s political affiliation, to suggest in 2010 that then presidential candidate Mar Roxas give way to Aquino as the party’s standard-bearer.

Pangilinan said the country’s preparation for the threat of El Niño, an abnormal weather phenomenon characterized by long dry spells, was among those on top of his to-do list, along with a review of the NFA’s rice import policy and assessment of its P170-billion debt, deployment of the coconut levy for the benefit of coconut farmers (PCA), and crop and pest infestation problems (FPA).

He insisted that he just came on board to support an agency with a broad area coverage and faced with broad problems that must be resolved in the last two years of the Aquino administration.

“I think the President felt the need to fast-track and to add support, so I don’t think there is anything wrong with that. There is no problem and that is what our secretary has said,” Pangilinan said.

The DA has 60 attached agencies so Alcala “still has 50-plus more,” he said. “That is how expansive it is.”

Pangilinan said he was not concerned that his appointment was being viewed as a political accommodation, having ended his second and final term as senator in 2013.

“It’s not an issue to me. The issue here is agriculture has many problems, it only grew by 1 percent last year in a universe of 7 percent,” Pangilinan said.

“The poorest of the poor are in the agriculture sector and if our focus is on inclusive growth, we have to address the problems of farmers and fisherfolk,” he added.

He had initially declined invitations to join the Cabinet a year ago as he decided to get his hands dirty raising vegetables in his Sweet Spring Country Farms in Tagaytay City and spend more time with his wife, actress Sharon Cuneta, and their children.—With a report from Ronnel Domingo