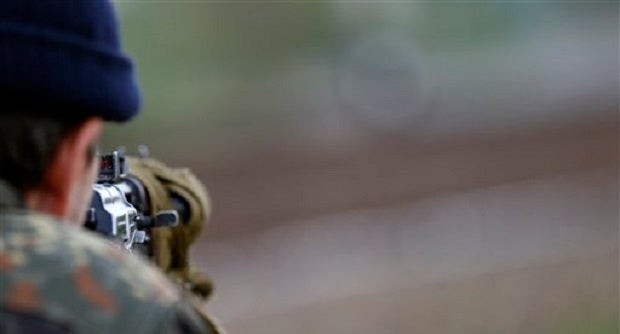 An armed Pro-Russian man guards the barricades on a road leading into in Slovyansk, eastern Ukraine, Monday, May 5, 2014. Ukrainian troops fought pitched gun battles Monday with a pro-Russia militia occupying an eastern city, an apparent escalation of their efforts to bring the region back under government control. AP

DONETSK, Ukraine—Ukraine’s Interior Minister said Tuesday that 30 pro-Russian insurgents were killed during operations to expunge anti-government forces in and near a city in the east, while the Kiev authorities attempted to reassert control over the southern region of Odessa by appointing a new governor there.

Arsen Avakov said on his Facebook page Tuesday that four government troops also died and 20 were injured during fighting in Slovyansk.

Gunbattles took place at various positions around the city Monday in what has proven the most ambitious government effort to date to quell unrest in the mainly Russian-speaking east.

Avakov said Monday that pro-Russia forces in Slovyansk, a city of 125,000, were deploying large-caliber weapons and mortars in the region and there were injured on both sides. Government troops were facing about 800 insurgents, he said.

In Donetsk, a major city some 120 kilometers south of Slovyansk, international flights from the local airport were suspended Tuesday. The airport said on its website that the cancellations followed a government order.

Ukraine is facing its worst crisis in decades as the polarized nation of 46 million tries to decide whether to look toward Europe, as its western regions want to do, or improve ties with Russia, which is favored by the many Russian-speakers in the east. Dozens of government offices have been seized, either by armed insurgents or anti-government crowds, over the past several weeks.

The central government attempted to re-establish control Tuesday over the predominantly Russian-speaking Black Sea region of Odessa, where 46 people died after fighting and a fire broke out between pro-Russian and pro-Ukrainian forces late on Friday.

In a statement published on the president’s website, the Kiev authorities announced they were firing the acting governor and replacing him with member of parliament Ihor Palytsya. On Saturday, the police chief of the city was fired, mere hours after he had called for calm.

While no reasons were given for the latest change, the interim Kiev government has previously wielded its authority to appoint regional governors as a way of reasserting control over rebellious regions in the country’s east. The concern that Odessa could be the next region to fall to pro-Russian forces — particularly after 67 people detained in the Friday fighting were released by the police under pressure from an angry crowd — has sparked concern in Kiev, which said it was sending an elite national guard force to the city on Monday.

The goals of the pro-Russian insurgency are ostensibly broader powers of autonomy for the region, but some insurgents do favor separatism.

Leaders of the anti-government movement say they plan to hold a referendum on autonomy for eastern regions on May 11, although visible preparations for the vote have to date been virtually negligible.

The Russian Foreign Ministry has put the blame for the unrest squarely on Kiev, which it says “stubbornly continues to wage war against the people of its own country.” The ministry has urged what it called the “Kiev organizers of the terror” to pull back their troops from the east and hold peaceful negotiations to resolve the crisis.