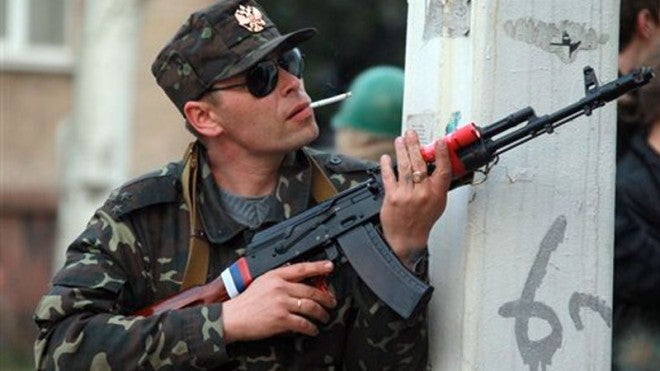 A pro-Russian gunman prepares his weapon as his comrades are about to storm a regional police station building in Luhansk, Ukraine, one of the largest cities in Ukraine’s troubled east, Tuesday, April 29, 2014. Pro-Kremlin rebels who much of the West believe are backed by Moscow are holding more than a dozen towns and cities in east Ukraine. AP PHOTO

KIEV, Ukraine—Pro-Kremlin rebels who much of the West believe are backed by Moscow are holding more than a dozen towns and cities in east Ukraine.

The epicenter of rebel activity and the scene of much of the reported violence and abductions. On April 12, pro-Russian gunmen seized the police building in this town of an estimated 120,000-140,000 people, raiding its arsenal. They then took over the town hall and the SBU security services building the same day.

This city of one million people is the regional center for the Donetsk region, which includes Slavyansk, and is the heart of what rebels call their “Donetsk Republic.” The regional administrative building was seized April 6 and the city hall on April 16.

This city of 465,000 inhabitants, which is also the regional heart of the Lugansk region, is proclaiming itself the core of a self-styled “Lugansk Republic.” Its SBU building was grabbed on April 6 by some 1,000 pro-Russian protesters. On April 29, a crowd of 3,000 took over the regional administrative building.

Just next to Slavyansk and 100 kilometers (60 miles) from Donetsk, this town of 160,000 inhabitants saw its town hall taken over April 12 during a rally by more than 1,000 pro-Russian demonstrators. On April 15, a bomb alert that turned out to be false cleared the building, but militants took over the nearby SBU building. On April 21, pro-Russian militants forcibly grabbed back the town hall. A Ukraine military base lies outside the town and has fended off several attacks.

— Makiivka, close to Donetsk and with 360,000 inhabitants, had its town hall taken over April 13.

— Artemivsk, population 78,000, had its town hall occupied by pro-Russian activists on April 12.

— Yenakieve, population 85,000, saw the police and prosecutor’s offices taken over on April 13.

In a rare victory for Ukraine’s security forces, the southeastern port city of Mariupol, population 480,000, was taken back from pro-Moscow rebels on April 25. But while police now control the town hall, a few pro-Russian protesters remain in the building and have not been cleared out.