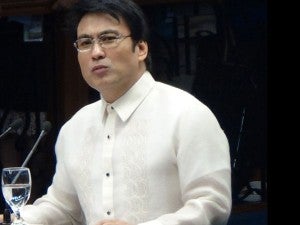 MANILA, Philippines–The Chief of Staff of Senator Ramon “Bong” Revilla asked the Supreme Court to stop the Office of the Ombudsman from pursuing the plunder case against him before the Sandiganbayan.

In a 29-page petition with application for a temporary restraining order and/or a writ of preliminary injunction, Cambe insisted that he has nothing to do with the so-called Priority Development Fund or pork barrel scam.

Cambe said his signatures that appear in the PDAF documents had been forged.

In his petition, Cambe said Ombudsman Conchita Carpio-Morales gravely abused her discretion in approving the joint order dated March 14, 2014 which found probable cause to charge him with one count of plunder, a  nonbailable offense, and 16 counts of violation of Section 3 (e) of Republic Act 3019 or the Anti-Graft and Corrupt Practices Act.

He said the Ombudsman violated his rights when she denied his motion to suspend proceedings without even reading it.

“The Ombudsman tackled and resolved issues that were not even raised in my motion,” he said.

Cambe explained that his motion to suspend proceedings was anchored on the noncompliance with a precondition or condition precedent before the filing of the National Bureau of Investigation (NBI) and the Ombudsman’s Field Investigation Office (FIO) complaints.

In his motion, Cambe noted that he prayed for the suspension of the preliminary investigation on the NBI and FIO complaints for plunder and graft charges, respectively, because the notices of disallowances that Revilla’s office had received from the Commission on Audit (COA) have not yet become final and executory.

Under Section 48 of Presidential Decree No. 1445 or the Government Auditing Code of the Philippines, he said “any person aggrieved by the decision of an auditor of any government agency in the settlement of an account or claim may within six months…appeal in writing to the Commission on Audit.”

He stressed that a final and executory order from COA is necessary before the NBI and FIO could file the complaints and without such compliance, the charges “are dismissible for being premature or at the very least the proceedings should be suspended pending finality of the notices of disallowance.”

Cambe recounted that FIO’s complaint stemmed from the audit findings of the COA, which allegedly revealed that  the PDAF of Revilla for the years 2007 to 2009 amounting to P517 million was released to Technology Resource Center, National Livelihood and Development Corporation (NLDC) and National Agri-Business Corporation (NABCOR)

In turn, the said implementing agencies transferred the PDAF releases to nongovernment organizations believed to be under the control of  pork barrel scam mastermind Janet Lim-Napoles.

Before the FIO complaint, the NBI filed a similar complaint to the Ombudsman on Sept. 16, 2013, charging Revilla, in alleged conspiracy with Cambe and other individuals, with plunder for supposedly receiving commissions in the total amount of P224 million from projects financed through PDAF.

“No matter how many times one will read petitioner’s motion to suspend, he will not find these issues or matters being remotely raised or discussed. Yet the Ombdusman read in petitioner’s motion something which was not there, and worse, she rendered a ruling thereon,” Cambe said.

Cambe claimed that he later found out that the Ombudsman merely “cut-and-pasted” her ruling on the arguments of Alexis G. Sevidal and Ofelia Ordoñez, also respondents in the NBI and FIO complaints, regarding the prematurity of the complaints.

“When the Ombdusman resolved petitioner’s motion without reading it and, worse, cutting and pasting the resolution of the motions of Sevidal and Ordoñez, which submitted issues different from the petitioner’s…the Ombudsman arbitrarily and despotically exercised her discretion with so much grave abuse that could only be seen as an internal violation of the petitioner’s basis constitutional right to due process and manifest display of injustice and oppression against the petitioner, making the proceedings a case of persecution rather than prosecution,” Cambe said.

Revilla had also filed a similar petition with the high court but the Court has yet to act on it.