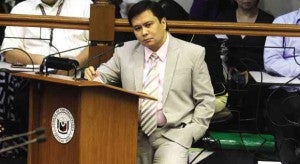 MANILA, Philippines—Senator Jose “Jinggoy” Estrada is now pressing the Senate Blue Ribbon Committee to open its inquiry into the alleged misuse of money from the Malampaya fund in which socialite Ruby Tuason has been implicated.

Estrada wondered why the committee’s chair, Senator Teofisto Guingona III, has not made good his promise to hold hearings on the Malampaya fund scam after partially reporting out the outcome of its inquiry into the pork barrel racket.

He said it was about time the committee also “uncovered the truth” behind one of the biggest scams in recent history involving close to P1 billion.

“Senator Guingona has repeatedly said that he was about to start investigating the Malampaya scam but has not done so yet,” Estrada, a member of the committee, said in a statement.

Estrada last Friday called Tuason the “mastermind” behind the Malampaya scam hours after the Office of the  Ombudsman announced it was making her a state’s witness and granting her immunity from prosecution in the P10-billion pork barrel scam.

Tuason had testified that she delivered kickbacks from the racket to Estrada in his Senate office, and Senator Juan Ponce Enrile’s then chief of staff Jessica Lucila “Gigi” Reyes in restaurants. Both denied the allegations.

While she has gotten immunity in the pork barrel case, Tuason isn’t off the hook yet in the Malampaya scam, Justice Secretary Leila de Lima said.

Tuason is facing a plunder complaint along with former president and now Pampanga lawmaker Gloria Macapagal-Arroyo and 22 others for the alleged misuse of P900 million in proceeds from the Malampaya gas fields off Palawan.

Tuason allegedly received P242 million in kickbacks on behalf of a still “unidentified principal.” An Inquirer source said the money was for Mike Arroyo as payment for expenses in the 2007 mid-term elections.

The Department of Budget and Management cleared the release of P900 million from the Malampaya Fund in December 2009 for assistance to agrarian reform beneficiaries affected by storms “Ondoy’’ and “Pepeng.’’

Prior to this, then Agrarian Reform Secretary Nasser Pangandaman authorized the release of P300 million from the Land Bank of the Philippines to 12 bogus nongovernment organizations controlled by Janet Lim Napoles, government documents showed.

Begun in 2002, the Malampaya project involves the extraction of natural gas from beneath the sea off Palawan. The government collects royalties from the project as well as taxes from the gas extracted.

Meanwhile, Communications Secretary Herminio Coloma Jr. denied Estrada’s claims that the grant of immunity to Tuason was a “done deal.”

“The grant of immunity was decided upon by the Office of the Ombudsman whose independence we respect,” Coloma said in a text message.

Coloma assured Estrada of a fair hearing should the Ombudsman file charges against him and several others in the Sandiganbayan in connection with the pork barrel scam.

“We are one with our people in being hopeful that, true to its mandate, the Sandiganbayan will exercise utmost fairness in hearing the cases that may be filed and in rendering a just verdict,” Coloma said.

The Ombudsman announced last month there was probable cause to file plunder charges against Estrada, Enrile, Senator Ramon Revilla Jr., Napoles and several others in connection with the scam, but gave the respondents an opportunity to file motions for reconsideration.

In the Know: Malampaya Fund