In the Know: Malampaya Fund 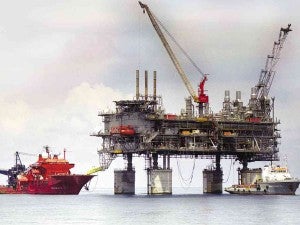 SOURCE OF GAS WEALTH The Malampaya gas rig is found 80 kilometers off the shore of northwest Palawan. INQUIRER PHOTO

MANILA, Philippines—At least P900 million in the Malampaya Fund originally intended for agrarian reform beneficiaries went to a dummy nongovernment organization (NGO) connected with Janet Lim-Napoles, according to an affidavit by Merlina Suñas, one of six whistle-blowers in the scam allegedly masterminded by the  president and CEO of JLN Corp.

The Malampaya Fund represents the royalties that the government collects from the Malampaya gas project in Palawan province. Started in 2002, the $4.5-billion project involves the extraction of natural gas from the waters off Palawan.

The fund is managed by the Department of Finance and is primarily intended for energy-related projects, but it could also be used for other purposes approved by the President.

Commission on Audit (COA) chair Grace Pulido-Tan said many government agencies had received Malampaya funds, but there had been no consolidated audit to determine whether the funds were efficiently disbursed.

The DOE said that in 2011 alone, the government received more than P43 billion in Malampaya funds. President Aquino himself accepted the check worth $1.1 billion in a turnover ceremony in Malacañang in January 2012.

According to Suñas’ affidavit, no supplies were delivered for the listed beneficiaries for the Malampaya Fund from Napoles’ People’s Organization for Progress and Development Foundation, one of a dozen formed by the businesswoman. Suñas headed this NGO and also was project coordinator of Napoles in the Department of Agrarian Reform (DAR), then headed by Secretary Nasser Pangandaman.

In her affidavit to the National Bureau of Investigation, Suñas explained that the local government was supposed to be the recipient of the agricultural kit supposedly to be supplied by the dummy NGO. “But no delivery was ever made, all the receipts were manufactured for the liquidation of the funds,” Suñas said.

Discovered in 1991, Malampaya lies 80 kilometers northwest of Palawan island, 3,000 meters below sea level. It is estimated to hold about 8.1 trillion cubic meters of natural gas reserves and 85 million barrels of condensate.

The Malampaya gas project is operated by Shell Philippines Exploration B.V. and Chevron Malampaya LLC, which hold controlling shares in the project. PNOC Exploration Corp. holds a minority share. The service contract provided a production-sharing scheme in which the government gets 60 percent of earnings from project operations.

Citing territorial jurisdiction, the Palawan government demanded 40 percent of the proceeds as provided for under the Local Government Code. The case is pending in the Supreme Court.

In February 2005, Palawan and the national government signed an interim agreement to jointly spend half of the province’s 40-percent share mandated by the Local Government Code.

In December 2007, Malacañang issued Executive Order No. 683, which provides for a provisional implementation agreement under which half of 40 percent of the proceeds could be used for development projects in Palawan. The arrangement was criticized as a pork barrel for the province’s top political leaders.

The Malampaya Fund was also used for the acquisition of the Philippine Navy’s cutter BRP Gregorio del Pilar, which reportedly cost around P450 million.