5 things you need to know about EDCA 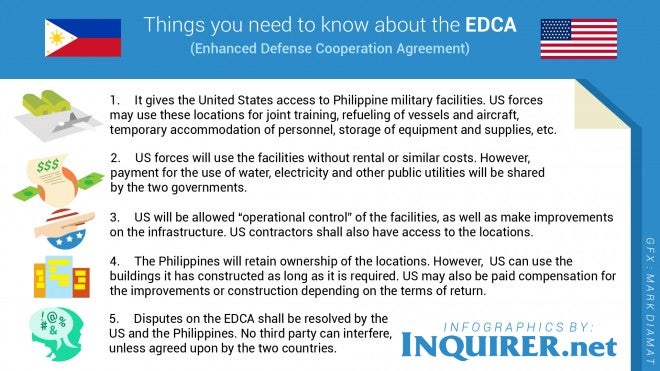 MANILA, Philippines—The devil may be in the details.

While proponents of the Enhanced Defense Cooperation Agreement (EDCA) said that it would be mutually beneficial to the Philippines and the United States, its critics claim that it would give the US “rent-free basing and other perks.”

It took a while before the government released a copy of the controversial defense pact, and now that it has been made available, the public is able to get a glimpse of how US forces will operate in the country for the next few years.

US President Barack Obama, during his recent state visit, made it clear that they would have no permanent bases in the Philippines. But what does the agreement say? While permanent basing was explicity prohibited in the agreement, it pays to take a closer look at the provisions.

Below are some important points:

“The US government hit the jackpot thanks to the mendicant Aquino regime. US forces will have access to facilities, rent-free. They can store or preposition weapons in our country free of charge. They retain operational control of the facilities and shall only allow Philippine access based on operational and safety requirements. They can even use our country to deploy US forces overseas. They will operate those facilities like they do US bases,” Bagong Alyansang Makabayan secretary general Renato Reyes said in a statement.

But Presidential spokesperson Edwin Lacierda, in a press briefing on Wednesday, said “there is no such thing.”

Lacierda reiterated that the purpose of the agreement was to promote the modernization of the Armed Forces of the Philippines (AFP).

Reyes, however, pointed out that “it is not clear how this can be accomplished.” He claimed that the country will become a “weapons depot” and Philippine soldiers “glorified security guards of US troops and their equipment.”

“We believe that this Enhanced Defense Cooperation Agreement will not only benefit them, but will also benefit us in terms of enhancing our military capabilities, improving our training, sharing of resources, for instance… How can we do mutual assistance when one side is not up to par with the other side? So we need to improve the level of capabilities insofar as where we are lacking,” Lacierda said.

What does the new PH-US defense pact say?