MANILA, Philippines—In Malacañang, US President Barack Obama received a warm welcome. But few meters away from the Palace, about 3,000 militants roared in anger as they protested the American head’s visit to the Philippines.

Chants of “Obama Out!” rang out as protesters flocked to Mendiola Bridge, some 200 meters from the Palace grounds, ahead of Obama’s arrival at the Ninoy Aquino International Airport for a two-day Manila visit to cap  his four-nation Asian tour.

Demonstrators brought out a chariot effigy, the main attraction of the protest, and kicked off the parade from Liwasang Bonifacio. They marched through Avenida Rizal, Recto Avenue and stopped at the Chino Roces Bridge (formerly Mendiola Bridge).

On the chariot rode a huge papier-mâché of the US President and below was President Benigno Aquino III, in the form of a dog, pulling the carriage.

This was later reduced to ashes when protesters torched the effigy to show their rage against the US-PH partnership.

Making way for another bully

For Bayan Muna Representative Neri Colmenares, the US will merely replace China as the Philippines’ “bully.”

“We should stand by our territory against incursions but that does not mean that we will fight China, and let US enter the scene,” Colmenares told INQUIRER.net.

“Parang nagtanggal tayo ng isang bully para papasukin ang isang bully (It’s as if we eliminated/defeated one bully, but made way for another bully).” 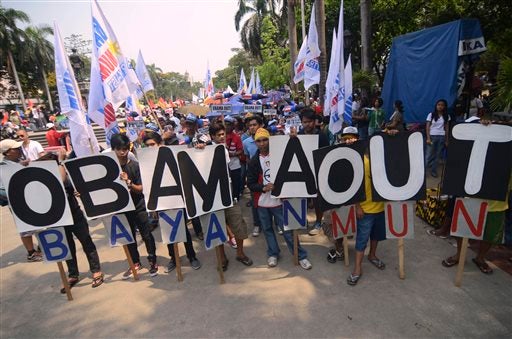 Colmenares said that forging the Enhanced Defense Cooperation Agreement (EDCA), which the Philippine military signed with US Ambassador Philip Goldberg earlier on Monday, will justify the establishment of military bases of US troops in the country.

“We do not see any pros in this agreement. Ostensibly, America is against China, but it will only act according to its interest,” he added.

The lawmaker pointed out that the US reportedly owes China $1.28 trillion as offshoot from its trading and investment with the Asian giant worth around $8 to $9 billion each year.

“Will it (America) risk that for the Filipino people?” Colmenares said.

Bagong Alyansang Makabayan (Bayan) Secretary General Renato Reyes Jr. also told INQUIRER.net that only the US would benefit from the EDCA.

Reyes also slammed the supposed permanence of the US troops in the country as provided by the EDCA.

“The reality is nakapagbaba na sila ng US military sa Pilipinas under the VFA. Never has there been a day since 2002 that no US troops were present in this country,” he said.

In a separate statement, Bayan said the EDCA gives US the right to access Philippines’ military facilities and allows them to preposition their weapons and equipment in the country.

“No bases, no US troops. We’d like to tell the president that we want peace, we want regional peace. We do not want to be involved or dragged into US instigated conflicts in the region,” he said.

Asked if what he would ask Obama if the US President is in front of him, he said “igalang mo naman kaming mga Pilipino (Please respect us, Filipinos).”

“We are not a colony of the United States anymore,” he added.

Police declared the event as generally peaceful as no untoward incidents were reported throughout the rally.

‎Superintendent Fernando Opelanio, Sta. Mesa Police station commander, told INQUIRER.net that there were no tension or encounter between the 200 policemen and the protesters.

Although some groups attempted to remove the steel barricades securing the gates of the Mendiola Peace Arch, the barbed-wire barricades were immediately put back after a brief negotiation.

Opelanio added that ‎maximum tolerance was also observed by the police, as it is the standard rule when rallies are held.

Security in place for Obama as police hope for ‘peaceful’ visit