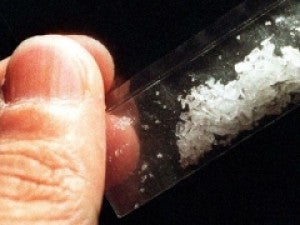 The three were arrested in a buy-bust operation in their residence on Mais St. in Barangay (village) Tumana at 10:30 a.m., Senior Supt. Vincent Calanoga, the city’s chief of police, said.

He said when in the house, Anares called Abdul, who was subsequently given the “money” for the drugs.

Calanoga said after the payment, Abdul then called on Gimba so she could bring in the drugs that had been “paid for” by the poseur-buyer.

“So when the shabu was given (to the poseur-buyer), the police (announced an arrest),” Calanoga said.

He said Anares even tried to get away by attempting to jump out of a window on the second floor that led to house rooftops.

“But we were able to chase him even before he got to the window,” Calanoga said.

Apart from 66 sachets of methamphetamine hydrochloride, Calanoga said a .45 cal. pistol, and bullets from a 9 mm. cal. pistol and from a .45 cal. pistol were recovered in a search of the suspects’ house that was “incidental to lawful arrest.”

The police report said two weighing scales and six cell phone units were also recovered from the house, among others.

According to the police official, based on their investigation, the three suspects were  given the drugs by a main supplier, which they themselves “repacked” in the house.

Street pushers from Barangay Tumana and other barangays would then go to the three suspects to get their merchandise, Calanoga said.

“(The three suspects) have that shop, and the direct sellers of the drugs (sold in the shop) are the street pushers,” he explained, adding the suspects refused to reveal the identity of the “main supplier.”

The police official said Abdul and Gimba seemed to be repacking drugs when the police arrived.

He said the confiscated shabu were the finished products that seemed to be “already up for distribution.”

“They were already in sachets,” Calanoga said.

He surmised the drugs were repacked in time for a feast in adjacent Barangay Malanday.

Drug-related charges have been set to be filed against the three suspects, Calanoga said.