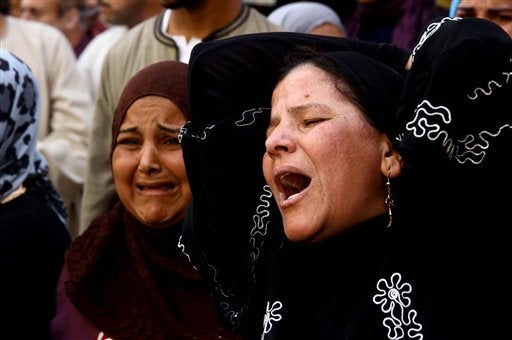 Egyptian women weep after a judge sentenced to death more than 680 alleged supporters of the country’s ousted Islamist president over acts of violence and the murder of policemen in the latest mass trial in the southern city of Minya, Egypt, Monday, April 28, 2014. Attorney Ahmed Hefni told reporters outside the court in Minya on Monday that the death sentences first have to be approved by Egypt’s mufti, the top Islamic official — a step that is usually considered a formality. AP

MINYA, Egypt— A judge in Egypt sentenced to death 683 alleged supporters of the country’s ousted Islamist president on Monday over acts of violence and the murder of policemen in the latest mass trial in Egypt that included the Muslim Brotherhood’s spiritual leader, defense lawyers said.

Under the law, Monday’s verdicts in the southern city of Minya have to be referred to Egypt’s Grand Mufti, the top Islamic official, said one of the attorneys, Ahmed Hefni.

Such a move is usually considered a formality but the same judge in the trial on Monday also reversed most of the death sentences out of 529 that were passed in a similar case in March, and commuted the majority of them to life imprisonment.

Monday’s case is linked to deadly riots that erupted in Minya and elsewhere in Egypt after security forces violently disbanded sit-ins held by Brotherhood supporters in Cairo last August.

Hundreds were killed as part of a sweeping campaign against supporters of ousted President Mohammed Morsi, who was removed by the military last July.

After Mufti’s decision, the same court will hold another session on June 21 to issue the final verdicts.

Monday’s stunning decision sparked an outcry among families of the defendants, with women fainting and relatives wailing and crying out “Why? This is unfair!”

“My three sons are inside,” said a woman outside the court who only gave her first name, Samiya, as she screamed in grief. “I have no one but God.”

“This is against the spirit of the law. The verdicts will be easily appealed,” Kamal told reporters.

The same judge, Said Youssef, last month sentenced 529 Morsi supporters to death but on Monday commuted the sentences of all but 37 defendants. The remaining 490 were given life sentences.

At the time, those rulings brought heavy international criticism from the United Nations, United States and European Union.

Amnesty International called them “grotesque” and Egyptian rights groups were stunned at the swift verdicts, passed after only one hearing — and without defense presenting its case.

Egypt’s interim, military-backed government has branded the Brotherhood a terrorist group, a claim it denies.

Some 16,000 people have been arrested since the military ousted Morsi last July, including most of the group’s top leaders. Large numbers of pro-Morsi protesters have also been rounded up and detained by police.