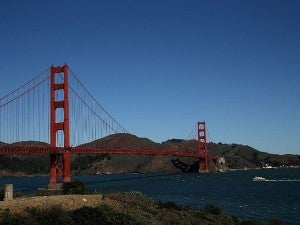 RICHMOND — Two small planes collided over San Francisco Bay, leaving a pilot missing after only one of the aircraft landed safely, authorities said.

The Cessna crashed into the water, and the Sea Fury’s pilot was able to land 40 minutes later, Gregor said.

The pilot and passenger in the Sea Fury — a husband and wife — were not injured, Amador County Undersheriff Jim Wegner said.

The planes were at the Pacific Coast Dream Machines, an annual festival that features a variety of planes, motorcycles and cars, The San Francisco Chronicle reported.

Witnesses at Point San Pablo Yacht Harbor told the newspaper that the Cessna spiraled out of control and crashed into the choppy water after the collision.

Wegner wouldn’t discuss damage to the Sea Fury, citing the ongoing investigation by the FAA and the National Transportation Safety Board.

FAA records indicate the Sea Fury, a vintage British fighter plane, is registered to Sanders Aeronautics Inc. in Ione. A man who answered the phone at the company’s listed number declined to comment.

Skydiving planes collide in US; everyone escapes