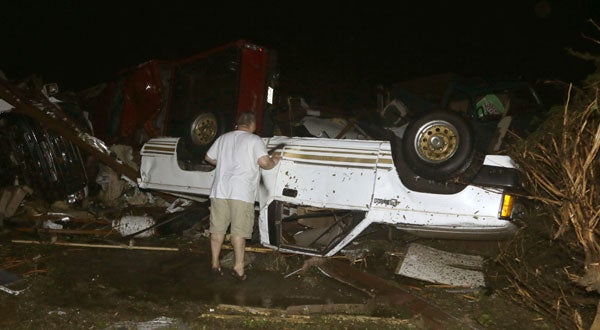 John Ward, an automobile and RV dealer, looks an tornado damage to one of his trucks in Mayflower, Ark., Sunday, April 27, 2014. A tornado struck the dealer’s on lot Sunday. AP

Matt DeCample, a spokesman for Arkansas Gov. Mike Beebe, said eight in his state were killed Sunday when a tornado carved through several Little Rock suburbs.

A separate tornado from the same storm system killed one person in Oklahoma.

The large tornado outside Little Rock, Arkansas, stayed on the ground as it moved northeastward for at least 30 miles (48 kilometers). Television footage showed badly damaged buildings and vehicles.

Tornadoes also touched down in Nebraska, Iowa and Missouri.

Tornado watches — which means twisters could develop but aren’t an immediate threat — were in effect for states as far west as New Mexico and as far east as Tennessee, and the system produced storms that were moving through the region in waves. Watches were also issued for Kansas, Missouri, Mississippi, Nebraska, Iowa, Texas and Louisiana.

“Looks like about half of town got extensive damage as well as the fire department,” Morgan said.

The Missouri Highway Patrol reported a tractor-trailer was blown onto its side on Interstate 70. No one was injured.