Skydiving planes collide in US; everyone escapes 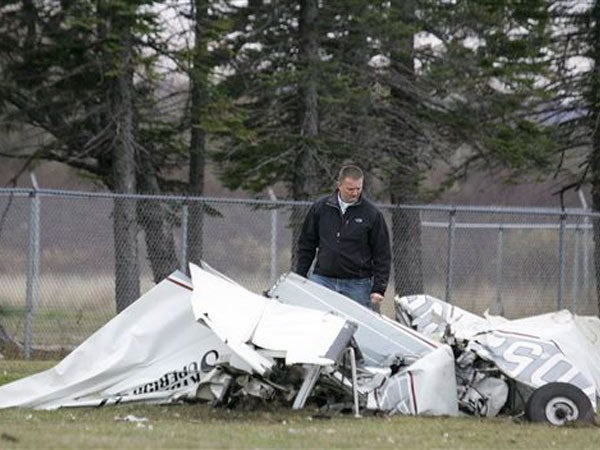 An FAA investigator examines the wreckage of a plane that crashed in Superior, Wis., Saturday after a midair collision with another plane. Both planes were carrying skydivers. No one was seriously injured in the incident. AP

Skydiving instructor Mike Robinson was at 12,000 feet (3,600 meters), just seconds away from his fourth and final jump of the day, when a second plane carrying other skydivers struck the aircraft he was in, sending them all tumbling toward the ground.

None of the nine skydivers or two pilots sustained serious injury when the two planes collided in midair Saturday evening in far northwest Wisconsin near Lake Superior. Officials with the Federal Aviation Administration were in the area Sunday talking to those involved, and the cause of the incident was still being investigated, said FAA spokesman Roland Herwig.

Robinson, an instructor and safety adviser for Skydive Superior, said the skydivers had gone up for their last jump of the day — called the “sunset load” — and the two planes were flying in formation. It was supposed to be a routine jump, and a fun one for Robinson, who usually dives as a trainer.

All of the skydivers were instructors or coaches and had hundreds, if not thousands, of jumps under their belts. It was Robinson’s 937th jump.

“We do this all the time,” Robinson said. “We just don’t know what happened for sure that caused this.”

He and three other skydivers were in the lead plane, and all four had climbed out onto the step at the side of the Cessna 182 and were poised to jump. The plane behind theirs had five skydivers on board, three in position to jump and two more inside the plane, at the ready.

“We were just a few seconds away from having a normal skydive when the trail plane came over the top of the lead aircraft and came down on top of it,” he said. “It turned into a big flash fireball, and the wing separated.”

“All of us knew we had a crash. … The wing over our head was gone, so we just left,” he added.

Robinson, 64, who lives north of Duluth, Minnesota, watched as the plane he’d been in spiraled downward and broke into pieces.

“Looking around, we’re seeing the wing that came off. We’re seeing it’s on fire, and there are just parts of the airplane floating in the air with us,” he said. “We were falling faster than those parts … So the concern was we get away from the crash area.”

Robinson said the skydivers had parachutes that allowed them to steer themselves away from the falling debris and toward the planned landing spot. They opened their parachutes between 3,000 and 5,000 feet (900 and 1,500 meters) and landed safely.

The pilot of the lead plane, the one that broke apart, used an emergency parachute that cannot be steered, Robinson said. He landed elsewhere and suffered minor injuries that required medical attention.

Robinson said his group was lucky.

“It might’ve been a lot worse,” he said. “Everybody, to a person, responded just as they should, including the pilots.”

He said that as he was diving, he grew concerned when he saw only one emergency parachute — meaning only one pilot had ejected. He was relieved to learn the pilot of the second plane was able to stay with the aircraft and land it.

Robinson said he suffered no injuries, but a few jumpers had bumps, bruises and muscle soreness. And despite the scare, he said he would not hesitate to skydive again.

“Whenever the clouds and winds allow us to be up, we’ll be jumping,” he said, although now the company is without aircraft.

Recently, a skydiving accident in Belgium claimed the lives of 11 people. Part of the aircraft’s wing broke minutes after the plane took off from an airfield on Oct. 19, sending the plane into a spiraling nosedive. The parachutists, nearly all between the ages of 20 and 40, were celebrating a birthday and weren’t able to jump out. The cause of that accident is being investigated.

The National Transportation Safety Board did not return a message from The Associated Press seeking comment.