The one beside you can be a saint–Tagle 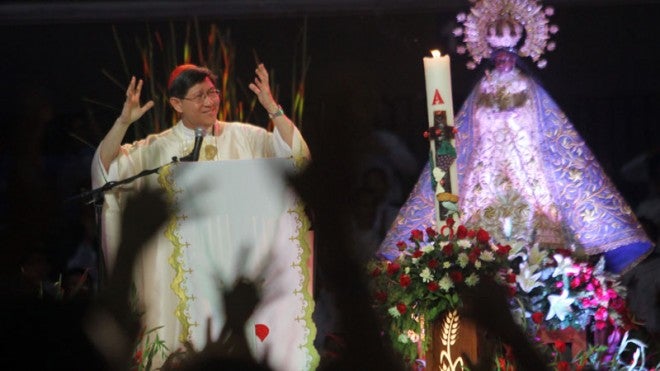 MANILA, Philippines—Juliana Panes held back her tears as the procession carrying the relics of Saints John XXIII and John Paul II made its way to a makeshift altar at Smart Araneta Coliseum in Quezon City on Sunday.

“I believe God will grant my prayers for better health because the two pope saints are helping me,” the 67-year-old retired teacher told the Inquirer.

A diabetic, Panes was among the thousands of Filipino Catholics who gathered at the coliseum to join the Catholic world in celebrating the canonization of Pope John XXIII and Pope John Paul II at the Vatican.

Cardinal Antonio Tagle, Manila archbishop, who celebrated Mass in honor of the two new saints of the Catholic Church, said the canonization of the two popes was a reminder that even ordinary people “can be holy.”

“The celebration today is a loud declaration to the world that holiness is real…. You are holy and you are ought to be holier still just like the two popes,” Tagle said in his homily.

“It is good to celebrate a canonization to proclaim to the world that holiness is still real. Holiness is a gift of God to all of us, to ordinary men and women as ordinary as John XXIII and Karol Wojtyla,” he said, using St. John Paul II’s real name.

He said the canonization of the two giants of the Catholic Church was more meaningful because it happened during the celebration of the Divine Mercy Sunday, which was instituted by Pope John Paul II and celebrated on the Sunday after Easter.

Looking animated, Tagle said even ordinary members of the Church were “called by God to be holy.”

“You and me, we are ordinary citizens of the world. But all of us have been given the grace of holiness and we are called to live by that holiness. It is given to all. You can be holy,” Tagle said.

“Believe it or not, the one sitting beside you at this moment can be a saint, even if his or her face looks like that,” he said, eliciting chuckles from the crowd.

Tagle turned emotional as he shared his experiences as a naughty high school student who frequently slept in his class.

“Despite all that, I’m now a cardinal—only through the mercy of God,” he said, crying.

“Many of us may just be sleeping and do not know what we should do [in our lives]. But God trusts us,” he said.

In Bacolod City, Bishop Vicente Navarra prayed that the canonization of Pope John Paul II and Pope John XXIII would awaken the faithful to the cultures of greed and death and to the need for a renewal of faith.

Navarra celebrated Mass in honor of the two new saints at 10 a.m. at San Sebastian Cathedral where large portraits of John Paul II and John XXIII were unveiled and blessed.

In his homily, Navarra recalled that Pope John Paul II knelt at the altar of San Sebastian Cathedral and prayed for the people of Negros and Bacolod during his first visit to the Philippines in February 1981.

Later, addressing landowners and workers at a reclamation area in Bacolod, the Pope said, “The Church will not hesitate to take up the cause of the poor and to become the voice of those who are not listened to when they speak up, not to demand charity but to ask for justice.”

Prayers of the poor

Navarra said St. John Paul II would hear the prayers of the poor and those who are heavily burdened.

He also said St. John Paul II would pray that the Philippines may be saved from the scourge of the culture of death, especially divorce, euthanasia, abortion, total human population control and homosexuality.

Navarra said St. John XXIII would be remembered as the Pope who called the Second Vatican Council and opened the windows and doors of the Church to the world.

In the afternoon, Catholics gathered at the Bacolod public plaza to watch the canonization rites for the two popes at the Vatican.

The public screening of the canonization rites was part of the Festival of New Saints organized by JPII Institute to celebrate the elevation of the two pontiffs to sainthood.

In Leyte province, Masses were held in the Archdiocese of Palo in honor of Saints John Paul II and John XXIII.

Fr. Amadeo Alvero, Palo archdiocese media coordinator, said it was fitting for Catholics to celebrate the canonization of the two popes, particularly John Paul II who visited the Philippines twice.

Msgr. Jaime Villanueva, Palo archdiocese vicar general, said that while Pope John Paul II did not visit Eastern Visayas during his two apostolic journeys to the country, the faithful in the region had a link to him.

He said the bed was placed in a room in Gonzagahaus, the residence of the Palo archbishop, which was damaged by Super Typhoon Yolanda.—With reports from Joey A. Gabieta and Carla P. Gomez, Inquirer Visayas