VATICAN CITY—In what could be the biggest religious gathering in European history, hundreds of thousands of pilgrims erupted in applause after Pope Francis proclaimed his predecessors John XXIII and John Paul II the newest saints of the Catholic Church on Sunday.

“For the honor of the Blessed Trinity, the exaltation of the Catholic faith and the increase of the Christian life, by the authority of our Lord Jesus Christ and of the Holy Apostles Peter and Paul and having sought the counsel of many of our brother bishops, we declare and define Blessed John XXIII and John Paul II to be saints and we enroll them among the saints, decreeing that they are to be venerated as such by the whole Church,” Pope Francis said in his formal proclamation in Latin about 30 minutes into the canonization Mass.

Hundreds of thousands of pilgrims from around the world flooded into the Vatican on Divine Mercy Sunday to attend the canonization rites. The crowd was so large it stretched back along all of Via della Conziliazione, the half-kilometer-long, broad boulevard that starts at the Tiber River. Even its bridges were packed with pilgrims.

Police estimated the crowd at 2 million to 4 million, but the Vatican estimated that 800,000 people watched the canonization Mass in Rome, with about 500,000 in St. Peter’s Square and nearby streets and the rest watching on TV screens that had been set up in piazzas around downtown.

Filipino Lynne Dizon, a leader of the Philippine Catholic community here, said it was the biggest canonization she had seen in her 27 years in Rome.

Aside from the excitement of seeing two of the 20th century’s most beloved popes made saints together, pilgrims were also eager to see two living popes together in public—Pope Francis performing the canonization and Pope Emeritus Benedict XVI, who resigned last year due to old age, concelebrating the canonization Mass with the reigning Pontiff.

Benedict, the first Pope to resign in 600 years, wore white vestments, and the crowd lustily applauded when television cameras showed a close-up picture of him smiling from the side altar.

It was Benedict who beatified John Paul II in 2011, six years after the Polish Pontiff’s death in 2005, in the swiftest beatification in modern history.

The Italian media and Vatican officials called the canonization “the day of four popes.”

In his homily, Pope Francis called the two newest saints “popes of the 20th century” who “were not afraid to look upon the wounds of Christ.”

“They lived through the tragic events of that century, but they were not overwhelmed by them,” Francis said. “For them, God was more powerful; faith was more powerful—faith in Jesus Christ the Redeemer of man and the Lord of history.”

John Paul II, the Polish Karol Wojtyla, was the longest-reigning Pontiff of the 20th century (r. 1978-2005) who helped crush communism in Eastern Europe.

Italians and Poles attended the canonization in the thousands, eager to see their favorite sons declared saints.

Pilgrims carried streamers of the Solidarity, the Catholic workers’ union supported by then Cardinal Wojtyla of Krakow and whose crippling boycotts against the communist bosses triggered the downfall of communism.

Despite the huge Polish and Italian show of force, the event saw pilgrims from all the continents descending on St. Peter’s Square, eager to witness the canonization of the two universally beloved leaders of the Church.

Among the pilgrims were 6,000 Filipinos, according to Mercedes Tuason, the Philippine ambassador to the Vatican.

Among them was Fr. Ferdinand “Soy” Hernando, a former Augustinian Recollect who founded the Missionaries of the Beatitudes in 2007.

Hernando said Pope John Paul II inspired him as a high-school seminarian in 1979 and also during his theological studies in Rome.

Another Filipino pilgrim, Rosario Melchor, wife of the late Philippine Ambassador to Russia Alex Melchor and a member of the Marian Movement of Priests, recalled how she met Pope John Paul II during his first visit to the Philippines in February 1981 to beatify Lorenzo Ruiz.

“During Pope John Paul II’s visit to the Philippines in 1981, we were able to rush and finish 1 million handmade rosaries to be blessed during his Mass at Luneta,” Melchor said. 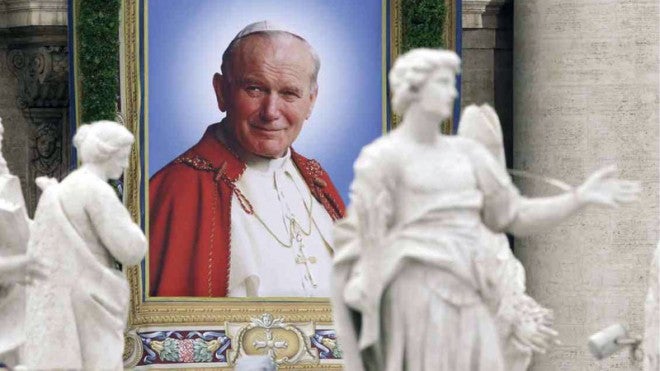 SAINTHOOD. The tapestry showing Pope John Paul II hangs from the facade of St. Peter’s Basilica during a solemn celebration of his and Pope John XXIII’s canonization. AP

“This was truly a miracle. As president of the World Apostolate of Fatima in the Archdiocese of Manila, I appealed and was helped by religious and civic organizations and even by the Armed Forces of the Philippines, whose soldiers and sailors, on board their ships, made rosaries by hand for the Holy Father’s visit,” she said.

Melchor traveled to Rome with other members of the Marian Cenacle for the canonization of Popes John Paul II and John XXIII.

Among the pilgrims in her group were Letty Syquia, wife of the late Philippine Ambassador to the Order of Malta Jose Syquia, Filipino visionary Nora Ilagan, writer David Panlilio, Archdiocese of Manila exorcist Fr. Jocis Syquia and Fr. Ramon Merino.

Many pilgrims carried images of St. John Paul II, a globe-trotter who made at least 104 trips abroad as Pope, showing how the Church embraced all nations and cultures.

There were pilgrims from heavily Catholic Latin America, including Pope Francis’ home country of Argentina, as well as from Africa (Congo, Kenya, Nigeria) where the Church has seen its most remarkable growth lately.

There were also pilgrims from Korea, Japan, India and Sri Lanka.

As expected, Filipinos dominated the Asian attendance. Filipinos in Rome, many of them proclaiming fond memories, especially of John Paul, took part actively in prayer vigils in the run-up to the canonization.

There were also Filipinos coming from the Middle East, Greece, Australia and North America.

There were even Filipino pilgrims from Austria, guided by a Filipino chaplain, Fr. Ely Dalanon, who said so sizeable was the Filipino Catholic population there that the Archdiocese of Vienna under Cardinal Christophe Schonborn had created three Filipino chaplaincies.

Although Pope Francis said he wanted Vatican celebrations to be modest affairs, the canonization was a magnificent display of solemnity and fervent liturgy.

Some 100 heads of state and governments were  in attendance. One hundred fifty-four cardinals and 1,000 bishops concelebrated the canonization Mass with Popes Francis and Benedict XVI.

Francis praised as well the deep faith of his two predecessors. “These were two men of courage, filled with the parousia (presence) of the Holy Spirit, and they bore witness before the Church and the world to God’s goodness and mercy.”

The two new saints “teach us to enter ever more deeply into the mystery of divine mercy,” he said.—With reports from Josephine Darang and AP