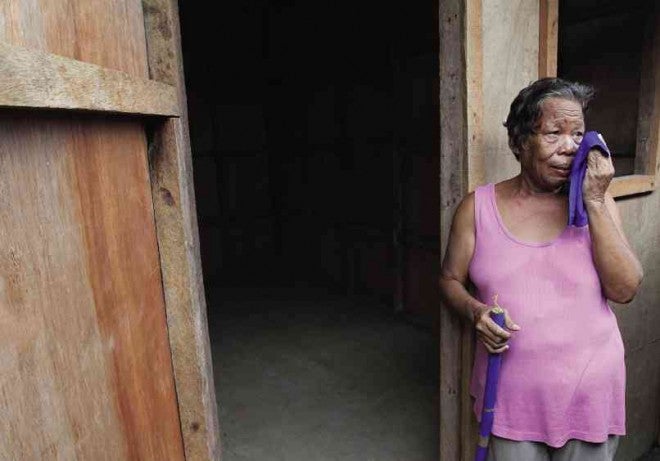 CLARITA Dosal is now temporarily living at one of the bunkhouses in Motocross Caibaan, Tacloban City, after her house was destroyed by Supertyphoon “Yolanda,” which also killed her child and grandchild. RAFFY LERMA

Government officials have explained the delay in the release of rehabilitation funds to victims of Supertyphoon “Yolanda” amid growing criticisms and protests.

President Aquino’s point man for rehabilitation and recovery, Panfilo Lacson, said the national rehabilitation master plan had not yet been approved or implemented because some provinces failed to submit immediately their postdamage needs assessments (PDNAs) as required under Republic Act No. 10121 (Philippine Disaster Risk Reduction and Management Act of 2010).

In a visit to San Remigio town, Cebu province, on April 12, Lacson said the government expected full implementation of the master plan by June, or seven months after the supertyphoon ravaged mostly the Visayas on Nov. 8 last year.

House construction materials have been distributed in some areas in Eastern Visayas, Soliman said. These include nails, saws, hammers and galvanized iron (GI) sheets.

The government has assured the survivors that it will provide house construction materials worth P30,000 for each family whose houses were destroyed and P10,000 for those with damaged houses.

Data from the Department of Social Welfare and Development (DSWD) in Eastern Visayas showed that from December last year to April 2, 121,099 pieces of GI sheets were distributed to 7,615 families in the towns of Palo and Tanauan in Leyte province and in Guian town in Eastern Samar province.

In a statement released by its public information division, the Department of Public Works and Highways (DPWH) said it had procured and delivered roofing materials for distribution by the DSWD under its financial-assistance-in-kind program for the repair of houses.

Soliman acknowledged that the distribution of housing materials was delayed due to the lack of supply of the prescribed GI sheets, which are thicker than those commonly sold in hardware and construction supply stores.

The procurement and delivery of materials are done by the DPWH, she said, and their distribution, by the DSWD.

Rev. Marco Sulayao, coordinator of Task Force Tabang sa Ngalan sang Gugma, a church-based group in Iloilo province, said the nonavailability of the GI sheets was a “flimsy” justification for the delay in housing aid.

“[The national government] failed to adequately prepare for the supertyphoon. It was also inept in responding to the crisis. It is not simply a delay, but proof that the government still cannot get its act together,” Sulayao, who is also vicar general of the diocese of Iloilo of the Iglesia Filipina Independiente, told the Inquirer.

In an interview on April 10, however, Edilberto Tayao, DPWH Western Visayas director, said he was still waiting for guidelines on the distribution of housing assistance.

On April 11, Interior Secretary Manuel “Mar” Roxas II announced in Capiz province that the government had made available almost P4 billion in financial assistance to the typhoon-ravaged communities in Western and Eastern Visayas.

Despite the delay in assistance from the national government, communities battered by Yolanda are struggling to stand on their own feet with the help of private donors.

Lawyer Ahmad Clay Escolar, project head, said houses would be built for 4,000 displaced families who had been staying in danger zones and public easements.

Forty houses have been put up in Bogo’s Yolanda Village in Barangay La Paz. A total of 116 houses are to be built on the 1-hectare land.

Medellin Mayor Ricardo Ramirez of Cebu said municipal funds had been tapped to repair the damage. “We’re not sitting back to wait for the national government to come in. And I’m even afraid that if there is aid coming in, they’ll find that we have managed to fix ourselves slowly,” he told the Inquirer.

Ramirez said some public infrastructure facilities had been repaired with funding from cash donations amounting to P4 million raised by the local governments of Mandaue City, Valenzuela City, Cebu City, two towns in Mindanao, the provincial government and the Mayors League of the Philippines.

In Balangiga town, Eastern Samar, residents are thanking Peregrine Development International for the repair of the two-story municipal building and public market. The company spent close to P15 million to repair the two structures from Dec. 9, 2013, to Feb. 19, while the local government provided the workforce.

“On our own, we cannot repair the two structures, considering the huge amount it would take. But with their help, our municipal hall and our public market are now repaired, better than before,” Mayor Viscuso de Lira said.

People Surge, an alliance of organizations of Yolanda survivors, has deplored what it perceives as the focus of the national government on private investments to fund the rehabilitation of the devastated areas.

“Where did all the billions of pesos of donations go? It is the responsibility of the government to fund the projects instead of opening the devastated areas to big business corporations whose ultimate interest is to earn profit,” Dr. Efleda Bautista, the group’s vice chair in Eastern Visayas, asked during a meeting with Panay survivors in Iloilo City.