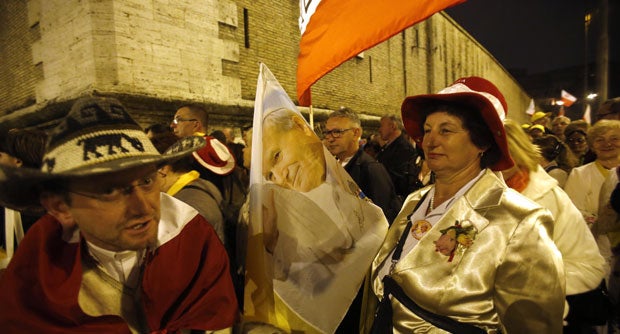 VATICAN CITY — Tens of thousands of people have filled St. Peter’s Square for a historic day of four popes, with Popes Francis and Benedict XVI honoring John XXIII and John Paul II by declaring them saints in the first ever canonization of two pontiffs.

Polish pilgrims carrying the red and white flags of John Paul’s beloved homeland were among the first to press into the square well before sunrise Sunday, held back by human chains of neon-vested civil protection workers trying to maintain order.

Most of those who arrived first had camped out overnight on air mattresses and sleeping pads along the side streets leading to the square. Others hadn’t slept at all and took part in the all-night prayer vigils hosted at a dozen churches in downtown Rome.

24 heads of state in Rome for rites