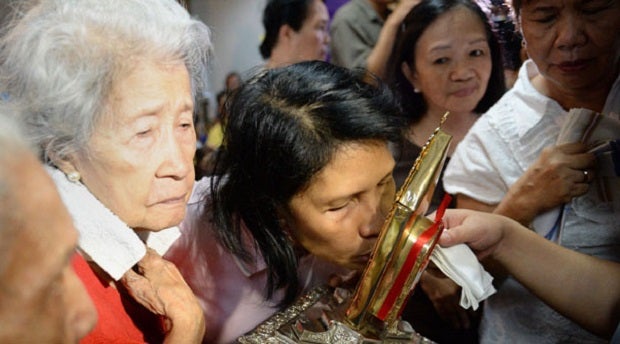 Manila Archbishop Luis Antonio Cardinal Tagle will lead Filipino Catholics in a special tribute to Popes John XXIII and John Paul II Sunday as the two well-beloved leaders of the Catholic Church are canonized at the Vatican.

Of the two Popes, John Paul II is closest to Filipinos’ hearts for his two visits to the Philippines, in February 1981 for the beatification of Lorenzo Ruiz, who would later become the first Filipino saint, and in January 1995 for the celebration of World Youth Day.

Tagle will celebrate a Mass at 4 p.m. at Smart-Araneta Coliseum, which Pope John Paul II declared a “colosseo of papal audiences” during his visit to the Philippines in 1981.

The faithful can also watch the canonization rites for the two Pontiffs at the Vatican before the Eucharistic celebration at the coliseum.

The event, called “Shepherds, Servants and Saints,” is jointly organized by Araneta Center, Jesuit Communications and the Archdiocese of Manila.

According to organizers, the tribute is considered doubly meaningful, as Catholics are celebrating the Year of the Laity.

“John Paul II was known as the Pontiff who called everyone to holiness, regardless of stature in life. The Year of the Laity echoes Pope John Paul II’s exhortation for everyone to be shepherds, servants and saints,” the organizers said in a statement.

Former Philippine Ambassador to the Vatican Henrietta de Villa said she believed the canonization of Pope John Paul II was a call for everyone to be holy.

“I think he is trying to show us that sainthood is not only exclusive to priests and nuns. He beatified and canonized a lot of holy people during his papacy to show us that we too can be holy. He wants us to realize that all of us can be saints,” she said in an interview with reporters.

The canonization rites at the Vatican will also be shown live during a youth gathering at John Paul II Parish in Eastwood City.

Aside from the event in Araneta, other dioceses, like the Diocese of Legazpi in Albay and Diocese of Malolos in Bulacan, also prepared activities to celebrate the canonization of the two Pontiffs.

In Cebu City, a Mass will be celebrated at the Archdiocesan Shrine of St. Pedro Calungsod at 6:30 p.m., to be followed by a candlelight procession to the life-size statue of Pope John Paul II at the Archbishop’s Residence compound.

The late Cebu Archbishop Julio Cardinal Rosales had the statue made in September 1981 to commemorate John Paul II’s visit to Cebu on Feb. 19 and 20 that year. The statue was repainted for today’s big event in Rome.

Msgr. Ildebrando Leyson, rector of St. Pedro Calungsod Shrine, said Masses would be held at the shrine for three days starting Monday in thanksgiving for the two new saints.

At the Cebu Metropolitan Cathedral and in other parishes in Cebu, Masses will be celebrated today in honor of the two Popes in addition to the Mass marking the feast of the Divine Mercy, which was instituted by Pope John Paul II and celebrated on the Sunday after Easter.

In Bacolod City, Bishop Vicente Navarra will celebrate a thanksgiving Mass for the canonization of the two Popes at San Sebastian Cathedral this morning.

In the afternoon, the canonization rites at the Vatican will be shown live on wide TV screens set up at the public plaza.

The free public showing is part of the “Festival of New Saints” organized by the JPII Institute and GMA Network Inc. to celebrate the canonization of John XXIII and John Paul II.

Architect Nestor Mangio, his wife Marion and their children joined “healing priest” Fr. Fernando Suarez on the trip to the Vatican for the canonization.

In a text message from Rome, Mangio, president of the Central Country Estate Inc., said John Paul II was special to his family for two reasons.

“My family personally met Pope John Paul II and he gave us a rosary each during our silver wedding anniversary in the Vatican in 2000,” Mangio said.

“My son Brian and his wife, Ann, met him after their wedding and asked for a child. [Ann] got pregnant after that and my first grandson is named Paulo, after the Pope,” he said.

Mangio and his wife met John Paul II again in late 2000 after a private Mass celebrated by the Pope.

“I pray to him every day because I know he is such a holy man and you can feel his aura when you meet him,” Mangio said.

In Baguio City, residents remember how they gave up work for a day to welcome Pope John Paul II in 1981. Until today, they say, they never realized that the man they welcomed was a saint.

Baguio was one of several places in the Philippines that John Paul II toured during his first visit to the country.

The Pope celebrated Mass at Burnham Park, which was crowded by devotees from various provinces in northern Luzon.

“It’s been a long time, but I remember Burnham Park covered by a sea of people,” resident Jun Willy said. “It was so hard to move. People were squeezed tight. Some were kneeling as the Pope said a prayer.”

Willy said it was the most disciplined assembly he had seen. “They were very quiet. They were very calm,” he said. That’s how they revered John Paul II.

Filipinos have a chance to get acquainted with Pope John XXIII through the Totus Tuus (All Yours) Tour that features some of his relics.

The Catholic Bishops’ Conference of the Philippines (CBCP) said the tour was organized by a religious organization to promote devotion to John XXIII.

Among the relics on exhibit is a piece of the cassock that the Pope wore as he was buried in 1963.

“It is doubly special because the cloth is drenched in the Pontiff’s bodily fluids, making it a first-class relic,” the CBCP said on its website.

The faithful will also see one of the commemorative medals that John XXIII gave as souvenirs to the participants in the Second Vatican Council that he called in 1963, but did not see it finish its job of modernizing the Church. It was Pope Paul VI who closed Vatican II in 1965.

John XXIII may not be as popular as John Paul II among Filipinos, but Filipinos of his time loved to call him “the Good Pope.”

To acquaint Filipinos with Pope John XXIII, a film based on his life will be shown during the tour in various venues.

The tour schedule is as follows:

May 9 to 12 – St. Joseph Parish in Upper Bicutan, Taguig City

May 13 to 16 – Holy Cross Parish in Matingain, Lemery, Batangas

May 17 to 18 – Holy Family Parish on Kamias Road, Quezon City

May 23 to 25 – Santuario de San Jose in Greenhills, Mandaluyong City

First at Vatican in 60 years