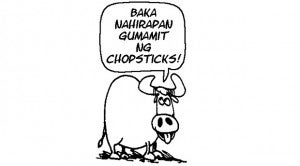 TOKYO—US President Barack Obama was all about business even at a special sushi dinner in Tokyo, which Japanese Prime Minister Shinzo Abe wanted to use as a bonding opportunity, reports said on Saturday.

“It was all about work,” Abe told his key ministers on Friday night about his conversation with the US leader during their private dinner on Wednesday at an exclusive Michelin-starred restaurant, according to major Japanese press, including the Nikkei business daily.

As a master sushi chef worked before them, Obama recited detailed figures to urge Abe to make concessions over the Trans-Pacific Partnership (TPP), a US-led free trade initiative involving 12 nations that would cover about 40 percent of the global economy. It is a key plank of Obama’s foreign policy “pivot” to Asia, and is considered a litmus test of Abe’s willingness to challenge special interests in reviving Japan’s economy.

A trade agreement between the US and Japan is crucial to the TPP. But the talks are stuck on the issue of Japan’s steep tariffs on the import of agricultural products like wheat and rice, which protect Japanese farmers.

“Your approval rating is 60 percent. Mine is 40 percent. I want you with strong support to make compromises,” Obama told Abe, according to the Mainichi Shimbun and the Tokyo Shimbun.

Instead of making small talk and savoring Japanese delicacies at Sukiyabashi Jiro—dubbed the world’s best sushi restaurant and the subject of the 2011 documentary “Jiro Dreams of Sushi”—Obama jumped straight into discussions about trade, the papers reported.

But the outcome of meetings between the two leaders has largely remained opaque, with Abe and Obama saying they had instructed their negotiators to keep trying to reach an accord.

US officials later declared that a “breakthrough” had been made in the talks.

Japan’s minister in charge of TPP Akira Amari told a television interview yesterday: “We have made 70 to 80 percent of the way.”

The Yomiuri Shimbun said Tokyo and Washington had effectively reached a broad agreement, but they are keeping it secret before a local election on Sunday in a Japanese farming region.

Japan’s Deputy Prime Minister Taro Aso said on Friday that Obama doesn’t have the political strength to consolidate US domestic support for the trade deal before crucial US midterm elections. AFP

Dreaming of sushi with Jiro Ono