‘Yolanda’ homes up in 5 days in Leyte 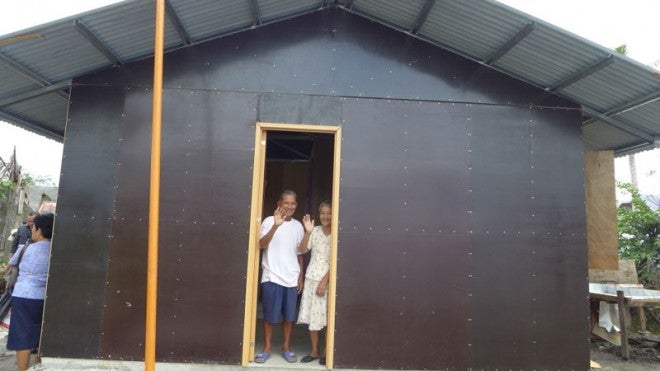 TANAUAN, Leyte—“Can they actually build your house in five days? Impossible! How are you going to pay them?”

The neighbors of Rosana Aguipo, 58, were incredulous when she told them that engineers, architects, carpenters, electricians and skilled craftsmen from the Jehovah’s Witnesses—the Christian denomination known for its door-to-door ministry—had pledged to waive professional fees and sacrifice time, energy and resources to build her a new house.

Since Dec. 26 last year, several teams of local and foreign Witness volunteers have been quietly building and repairing the homes of their members and their houses of worship, called Kingdom Halls, under their quick-build program, Local Design Construction (LDC), in Leyte and Samar.

As of April 25, more than 200 houses in Leyte and Samar had been erected, five months after Super Typhoon Yolanda (international name: Haiyan) devastated huge areas of eastern Visayas.

Each team of eight volunteers is able to finish building one house in five days. Construction, however, could stretch to 10 days, depending on the weather and the availability of materials.

Through the program, Witnesses from all over the Philippines and from foreign countries who are skilled in the construction trade temporarily leave their jobs to travel to Samar and Leyte at their own expense to help in rebuilding the houses.

Aguipo, who lost her husband, two children and six other relatives during the storm surge spawned by Yolanda, excitedly told her relatives and friend that she would soon have a new house. “But they told me not to expect too much since many people have made promises to us but nothing happened,” she said.

Aguipo, who belongs to the Tanauan Congregation of Jehovah’s Witnesses, said she cried and prayed the whole day when she learned that she was among the several hundred beneficiaries of the quick-build scheme.

Toiling in the heat

At 8 a.m. on March 24, the residents were thrilled to see seven to eight men of different backgrounds and speaking different languages hauling sand, gravel and other construction materials to the 20-square-meter lot of Aguipo in Barangay (village) Solano here.

In the next two days, the volunteers—who all had extensive training and experience in construction—toiled under the heat of the sun, pouring cement and laying the foundation.

On March 26, they worked for eight to 10 hours erecting bars, fabricating wall panels and screws, and drilling anchor bolt holes despite the rain. The next day, they worked from 8 a.m. to 9 p.m. installing the metal roof, doors, windows, electrical wiring and plumbing fixtures. On the fifth day, they were painting the house.

Then someone came to the site to inspect the house to ensure that every detail of the approved plan was strictly followed.

When the house key was turned over to Aguipo on March 28, she sobbed uncontrollably as she hugged each member of the construction team.

“Losing nine members of my household in one night is too painful to bear. But I’m comforted because God deeply cares about me. He moved others, even strangers, to show extraordinary love and kindness toward their neighbors,” she said as she wiped away tears.

Aguipo’s house has become the center of attraction in a village where houses were washed away or smashed to pieces, and scores of bodies recovered or have yet to be recovered.

Her neighbors thought they were in the wrong address when they saw a new one-bedroom house, complete with electricity, water supply and a toilet, rising in their village after barely a week.

“I invite them inside my house and tour them around to let them know that this is real,” Aguipo said.

“My house is more than just a structure; it symbolizes love and faith in action,” she added.

After they received their house keys, the beneficiaries profusely thanked “God, Jehovah’s Witnesses volunteers and the numerous kind-hearted souls around the world who show love to their neighbors.”

They said they were at a loss for words to describe how touched they were by “the outstanding act of love and camaraderie” displayed by the volunteers.

The construction volunteers came from six countries, including the United States, while the local workers traveled from Pangasinan, Manila, Bulacan, Mountain Province, Cebu and Mindanao.

Encouraged by the kindness and generosity of their fellow believers who erected their homes, most of the beneficiaries have signed up as volunteers themselves.

One of them is Daniel Sebastian, 58, who lost his 28-year-old daughter to the storm surge. Since he and his family moved into their new two-bedroom house in Palo town, Leyte, Sebastian has worked with the local and foreign volunteers, running errands or cooking for them.

“I’m happy working with fellow volunteers because it helps me focus on the more important things. I want to keep myself busy doing good things for others,” he said.

Many young people who have acquired new homes make up the bulk of the volunteer workforce.

Mazo survived Yolanda with his mother and three siblings. When their two-bedroom house in Mayorga, Leyte, was completed in February, he started volunteering in the construction, working side by side with volunteers from other countries.

“My neighbors would tease me because, imagine, my laborers are foreigners! And I don’t have to pay them a single centavo. But there is one way I know to repay their kindness—I can use my strength and time to help build the homes of others,” he said.

The Antivos, on the other hand, did not occupy their two-bedroom home after it was finished in March. When they learned that volunteers from other parts of the country could not find accommodation, they offered their new home instead.

“There is truthfulness to the Bible verse that there is more happiness in giving than there is in receiving. I’m blessed with a new home and a new life and I’m inspired to help my neighbors too,” Myra Antivo said.