MANILA, Philippines—The lawyer of some whistle-blowers in the pork barrel scam has released a document linking nine more former and current lawmakers to suspected mastermind Janet Lim-Napoles—among them an aunt of President Aquino and three other former senators, two former representatives, two incumbent allies and the elder son of former President Gloria Macapagal-Arroyo. 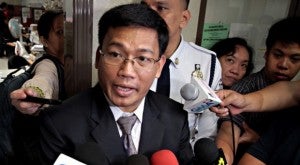 Lawyer Levito Baligod showed the Inquirer the document amid rife speculation on the who’s who in Napoles’ tell-all affidavit in which the wannabe state witness  revealed more names of lawmakers she had dealt with.

The document pertains to a P407-million information technology project in 2002 and 2003 that was cornered by Napoles and endorsed by  the nine legislators: former Senators Manuel Villar, Tessie Aquino-Oreta (an aunt of the President), Robert Jaworski and the late Robert Barbers  (who died in December 2005); former Representatives Zenaida Ducut of Pampanga (currently chair of the Energy Regulatory Commission) and Federico Sandoval II of Malabon-Navotas; Majority Leader Neptali Gonzales II and Deputy Speaker Carlos Padilla, and former Pampanga Rep. Juan Miguel “Mikey” Arroyo.

The project proponents, the Department of Transportation and Communications (DOTC) and National Telecommunications Commission (NTC), spent P95 million in 2002 and P312 million in 2003 for the purchase of computer hardware and software ostensibly to establish municipal telecenters nationwide.

The supplier was Jo-Chris Trading, owned by Napoles and run by her eldest daughter, after whom the company was named.

Baligod said that based on testimony of former Napoles employees at JLN Corp., these projects involved “ghost deliveries.” They claimed Napoles simply made up the list of beneficiaries and faked the delivery receipts.

“Jo-Chris Trading would present the same set of equipment to all the lawmakers as proof of purchase and delivery of the equipment. As far as the whistle-blowers know, there were no deliveries made,” said Baligod, the counsel of whistle-blowers Merlina Sunas, Nova Kay Macalintal, Lily Abundo and Adelina Lingo.

Baligod explained that the funds were congressional initiatives or budgetary insertions made by the lawmakers at a time when then President Arroyo was currying favor with the minority bloc, while rewarding those who were instrumental in ousting former President Joseph Estrada in 2001.

Baligod cited then Transportation Assistant Secretary and now Candaba, Pampanga, Mayor Rene Maglanque as Napoles’ main connection at the DOTC which was led by then Secretary Leandro Mendoza (who died in October last year). The NTC was led by then Commissioner Armi Jane Borje.

On Oct. 9, 2002, then Budget Secretary Emilia Boncodin (who passed away in 2010) issued special allotment release order (Saro) A-0204754 disbursing P95 million for the DOTC-NTC telecenter project.

Of this amount, P4.925 million was allotted by Ducut, who was tagged by the whistle-blowers as allegedly getting at least a 5-percent commission for every project she delivered to Napoles or to Jo-Chris Trading for the purchase of computers.

The lawmakers who endorsed the rest of the funds (released to Regions II, III, VI, IX, XII and Autonomous Region in Muslim Mindanao) were collectively identified as House minority bloc members who were then led by Padilla.

Boncodin issued another Saro (A-0305290) to the DOTC-NTC for P312 million on Nov. 18, 2003. The biggest item with a total of P90 million was allotted to Padilla and the House minority bloc, followed by Villar (who was then Senate President pro tempore) with roughly P60 million.

Other individuals who were allotted funds from this Saro and the amount they endorsed were Gonzales with P25.111 million on his own and P16.146 million in tandem with Sandoval; Barbers with P12.747 million; Arroyo with P4.6 million (he made his endorsement through a DBM letter); Oreta with P4.249 million; and Jaworski with P4.249 million.

The House majority bloc was also listed as having endorsed P3.2 million to Jo-Chris Trading but the individual members were not named.

In a text message, Gonzales responded: “As majority leader of the 12th Congress, it is not uncommon to request various departments for additional projects chargeable to its regular funds during budget deliberations.”

Gonzales confirmed that he received at least 200 IBM computers from the DOTC in 2003, which he allocated to various offices and schools in his district and other areas.

As early as 2005, the Commission on Audit had already tagged Jo-Chris’ supply agreement (the audit covered at least P19.572 million worth of IT equipment and ACU 1000 modules) with the DOTC-NTC as an apparent swindle.

The COA report said listed recipients of Jo-Chris denied having received any of these units.