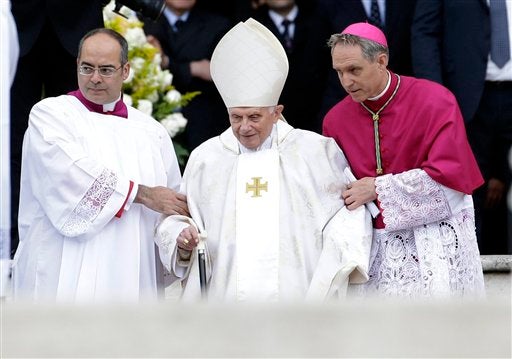 VATICAN CITY — Pope emeritus Benedict XVI made a rare public appearance on Sunday for a mass with Pope Francis to confer sainthood on popes John Paul II and John XXIII.

Benedict XVI, who last year became the first pontiff to resign since the Middle Ages, wore his papal white cassock and mitre and smiled and waved to the crowd.

The historic event has been billed by Italian media as “four popes Sunday” and is the first time that a living pope and a surviving former pope co-celebrate mass.

The 87-year-old German Benedict XVI, who retained his official title, has retired from public life and lives in a former monastery inside the Vatican City walls.

There was some concern that having two living popes could create confusion among the faithful but Francis has shown a willingness to turn to Benedict XVI for advice and the two are known to speak regularly.

“The pope emeritus is not a statue in a museum. He is an institution,” Francis said in an interview with the Corriere della Sera daily earlier this year.

“His wisdom is a gift from God,” he said.