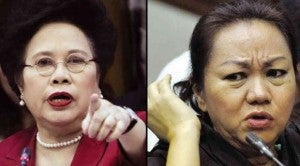 A few days after calling on the Senate blue ribbon committee to again summon alleged pork barrel scam mastermind Janet Lim-Napoles so she could to reveal all about the lawmakers she dealt with, Sen. Miriam Defensor-Santiago Friday put Napoles’ credibility to question.

Santiago apparently had a change of heart after her name appeared in a newspaper report listing those that Napoles had allegedly implicated in the pork barrel scam.

The senator said Napoles was part of a destabilization and disinformation campaign hatched by Sen. Juan Ponce Enrile to drag members of the Aquino administration into the controversy and thereby distract the public’s attention from those who have been charged for the scam.

“Now that the situation has changed, Napoles no longer has value,” said Santiago, who earlier said she hoped that Napoles would give the names of the senators involved in the pork barrel scam.

Enrile, Santiago’s bitter foe, is one of three senators to have been charged in connection with the pork barrel scam. The other two are Senators Jinggoy Estrada and Ramon Revilla Jr.

“[Napoles is] already damaged goods.  Her credibility is shot through and through. So what’s the point? She’s only going to tell us her own prefabricated story,” Santiago told a news conference.

She said it would not be enough for Napoles to just name the senators she claims were participants in the pork barrel scam.

“Just like any allegation in any court of law, you have to prove what you say. You cannot just say things and have them taken at face value and have them swallowed hook, line and sinker by any lawyer who knows his law,” Santiago said.

“So this is not a question on whether we should act on the accusations, it’s a question of whether the accusation is credible in the first place. What factor of credibility has she presented? Under the rules of court, you must present evidence,” she said.

Senate Majority Leader Alan Peter Cayetano, who was also named in the report, blamed members of the opposition for the news report linking Aquino administration officials as well as incumbent and former senators to the pork barrel scam.

“Who would benefit from all these? Wouldn’t it be Vice President [Jejomar] Binay?” Cayetano told reporters.

“While Napoles’ affidavit is kept under wraps many lists will come out, will muddle the issue and will benefit those guilty.  And this is what’s happening,” he said.

Cayetano said Napoles and those already charged are able to use the confusion to draw attention away from them.

He asked De Lima “to also verify if people on the list are in fact guilty and are clients of Napoles, or if their names are simply being dragged into the controversy.”

Ospital ng Makati (OsMak), meanwhile, has submitted to a Makati court a progress report on the health condition of Napoles, but did not say when she would be discharged.

Napoles underwent surgery for two hours last Wednesday during which her uterus and two ovaries were removed.

“The report stated she’s OK and there were no problems during the operation. After that, she was in the recovery room for six hours, then she was returned to her room,” said Diosfa Valencia, the Makati Regional Trial Court Branch 150 clerk of court and spokesperson.

Valencia said the report, which was prepared by Napoles’ team of doctors from St. Luke’s and submitted to the court by OsMak doctors and management, did not include a recommendation on how many days she would need to recover.

“There’s no word on her discharge. Her doctors still have to closely monitor complications postoperation. They’re still managing her blood sugar, high blood pressure. She has other ailments,” Valencia said.

“The next step of the Court, if there is no follow-up progress report, is to inquire about it,” Valencia said, adding that prosecutors may also file a motion to check or question any unexplainable delay in Napoles’ hospital stay.

But Valencia expects that Napoles would already be returned to her place of detention at Fort Sto. Domingo in Sta. Rosa, Laguna, by the next hearing on the serious illegal detention case on May 26.

“From what I’ve heard from doctors, in operations like that, it only takes a week or two for discharge, unless there are complications,” she said.

Napoles is under detention on a serious illegal detention case filed against her by her cousin, former employee and scam whistle-blower Benhur Luy.

The case is being heard at Makati Regional Trial Court Branch 150, which allowed Napoles to undergo surgery for a uterine cyst at OsMak. With a report from Jaymee T. Gamil

Seafarer with India variant intubated; 3 others on oxygen support — DOH