‘It will sow confusion; there are several now’
By: Jerome Aning, Norman Bordadora - @inquirerdotnet
Philippine Daily Inquirer / 12:35 AM April 26, 2014 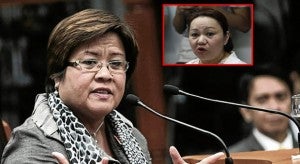 There would be havoc and disorder.

Justice Secretary Leila de Lima said she wanted to avoid this as she refused to give in to demands that she release the names of those, including lawmakers, said to have been tagged by alleged mastermind Janet Lim-Napoles as being involved in the P10-billion pork barrel scam.

“It would not be prudent on our part, [it would be] reckless, irresponsible if I’ll bow down to pressure from anyone or any group demanding that I disclose the list at this point. No, I will not do that,” De Lima told reporters on Friday.

There could be “mayhem” if she were to disclose the names on the list without first verifying them, De Lima said.

“I want to be very careful. Mayhem will ensue when the list will come out and [those named] will turn out to be not involved,” she said.

De Lima also called into question the claims made by others that they also have their own list of people involved in the large-scale theft of funds from the congressional pork barrel, the Priority Development Assistance Fund (PDAF).

“I think these [other lists] are only causing confusion. If every Tom, Dick and Harry now will have their own list, what will happen?” she said.

De Lima said she was not aware if Napoles or her camp had given such lists to other people and that she would ask her about it later.

She said the claims made about the existence of other lists could also be used by other parties to pressure her to prematurely disclose the list provided by Napoles.

De Lima referred only to a supposed list in the possession of Sandra Cam, president of a whistle-blowers’ association.

“I’m surprised with those reports [about Cam]. What is her personality in having something like that (list)? Is she an investigator? She’s not a whistle-blower in the PDAF scam,” she said.

Though De Lima did not mention him, presidential assistant for rehabilitation Panfilo Lacson earlier this week disclosed that he also had a Napoles list.

The former senator said Napoles, through her husband Jimmy, had given him a copy of an unsigned affidavit detailing how she ran the scam and a list of senators and House members who channeled billions of pesos worth of PDAF allocations to Napoles’ fake nongovernment organizations.

Asked what would happen if the names on the list given to her by Napoles were to differ with the other lists, De Lima said: “That is why I want to ask: These lists, did they come from Mrs. Napoles? What is the purpose of other camps coming out with other lists? I’m sure mine came from Mrs. Napoles.”

To those claiming to have their own list, she said, “Please, can you not meddle for a while? Many people are again meddling,” she said.

Former Senate colleagues of Lacson meanwhile are getting nowhere in their attempt to get him to disclose the names on his list.

Ask Napoles, or yourselves, Lacson suggested.

“The best person to name names is the one who prepared that list. Mrs. Napoles is available and accessible. She is also in the best position to substantiate with evidence the involvement of those on the list,” Lacson said in a text message.

“All those who wonder if they were guilty of abusing their pork barrel funds must only ask themselves to get the most accurate answer to their question,” said Lacson, who voluntarily gave up his PDAF allocations during the 12 years that he was senator.

He said he agreed with Senate President Franklin Drilon’s opinion that Lacson should only disclose the contents of his list if it is backed by other documentary evidence.

“That was exactly the reason why I kept the information shared with me by Napoles last month. I was waiting for her to turn over the pertinent documents that would support her draft affidavit,” Lacson said.

“The corroborating documents would be the better evidence than Mrs. Napoles’ affidavit,” he added.

As for Sen. Miriam Defensor-Santiago’s allegation that Lacson’s claiming he had a list was a ploy in a media campaign to force the Ombudsman to grant the motion for reconsideration of Enrile, Estrada and Revilla, Lacson said: “It is not sane to think that I will protect and cover up for Senator Enrile.  I have consistently advocated to abolish the pork barrel system as I believe it is the most hypocritical source of corruption among legislators.”

The Ombudsman has already found probable cause to charge Enrile, Estrada and Revilla with plunder in the Sandiganbayan antigraft court.

Santiago and Lacson have been at odds after Lacson took Enrile’s side in the big squabble in 2012 over then Senate President Enrile’s allegedly unfair distribution of cash gifts and discretionary funds in the chamber.

In a statement issued in response to a newspaper report, Alcala expressed “surprise” at being tagged along with 11 other Cabinet secretaries and senators as being on the Napoles list.

Alcala said allegations linking him to the scam were “baseless.”

He denied having known or met Napoles personally. He said he hoped his clarification would put an end to speculation triggered by the news report.

“It’s awful to be accused [of wrongdoing] when you’re innocent, more so when you’re not given a chance to explain,” Alcala said in Filipino.

Asked to comment on reports that President Aquino has discussed the allegations with him, along with De Lima and Budget Secretary Florencio Abad, Alcala said no such meeting took place on the date alleged.

“The President and I did not talk about the Napoles testimony. I discussed with him the Department of Agriculture’s own preparations in terms of agenda topics for the upcoming visit of US President Barack Obama,” Alcala said.

He said he did not believe that Malacañang was attempting to sanitize or manipulate the contents of Napoles’ testimony, contrary to claims that the Palace was engaged in protecting the President’s allies. With a report from Riza T. Olchondra